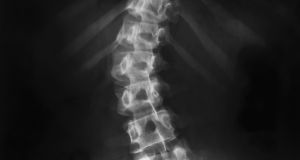 Scoliosis, a severe curvature of the spine, affects about 1 per cent of children and adolescents in Ireland. Photograph: iStock

Doctors have been told to suspend the use of a specific range of spinal rods in children with severe scoliosis until a review of the products has been completed.

A suspension of the Magec rod system has been relayed to paediatric specialists by product regulators in Ireland and the UK on Wednesday following concerns.

It applies to all models in the NuVasive Magec System. Last February its specific Model X design, used in a small number of Irish children, was recalled.

The Health Products Regulatory Authority (HPRA) has now published a “priority 2 warning” saying NuVasive “has issued a field safety notice informing healthcare providers that no Magec System rods of any model number shall be implanted pending completion of a market surveillance review of the system.”

The review is being conducted by the HPRA and the UK’s Medicines and Healthcare Products Regulatory Authority.

In a statement, the HPRA said the ongoing review “was initiated as a result of concerns raised in relation to this device”.

“The HPRA has met previously with parents of children in Ireland who have received the Magec Spinal System and continues to engage with these parents to discuss any concerns they may have related to the device,” it said.

“We would encourage device users or parents of children who may have experienced an incident with this device, to consider submitting a user report through our website.”

As with the Magec X recall earlier this year, the company has reiterated it does not recommend removal of functioning rods and that “any decision of that nature should be made by the consulting surgeon in conjunction with the patient/family”.

The HPRA said it did not believe there were any Magec rods on the Irish market any more, although they were used for here for a number of years.

A medical source familiar with the spinal procedures said it was no great surprise a freeze on the Magec products had been ordered and that it should have happened following February’s recall of the Model X.

US-based NuVasive could not be immediately reached for comment on Wednesday. However, it had previously said the decision to recall the Model X was because of a problem relating to the separation of an end cap component in a small number of rods inside the bodies of patients. This had the potential to expose some internal components, including alloy debris.

In Ireland, Magec products were only used in Crumlin children’s hospital. Following February’s recall, Children’s Health Ireland, the umbrella organisation for the country’s paediatric hospitals, said a review of cases had found “no adverse events or concerns”.

It said the rods in question had been implanted in a “small cohort” of patients but declined to specify how many, citing concerns over identification due to the low number involved.

Scoliosis, a severe curvature of the spine, affects about 1 per cent of children and adolescents in Ireland. Supporting “telescopic” rods of this kind are designed to treat the most severe early-onset cases.