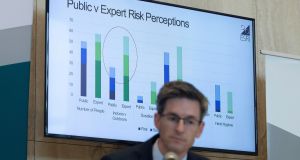 A lack of publicly available information hampers the proper understanding of current trends in relation to Covid-19, in particular the focus on rising cases in Dublin and Limerick.

Public health officials have singled out the two cities for particular expressions of concern, and may decide to recommend new restrictions to curb the growth of the virus there.

In Dublin, attention has been directed specifically to the north inner city as well as the west, where two pop-up swabbing centres have been opened in recent days.

The National Public Health Emergency Team (NPHET) obviously has at its disposal the most up-to-date information on current trends, as well as indications of what lies ahead.

The rest of us rely on a sometimes confusing assortment of data from the HSE, its Health Protection Surveillance Centre (HPSC) arm and the Department of Health. NPHET officials also release information at their briefings that is not in the public domain, and journalists sometimes obtain further information through media queries.

Until Wednesday, the evidence for singling out trends in Dublin and Limerick was not apparent, with Tipperary and Kildare having similarly high levels of transmission.

However, the latest daily epidemiological report from the HPSC shows Dublin pulling slightly ahead of the rest of the country with a 14-day incidence of 70.8 per 100,000 population. This compares to 69.2 in Kildare and 66.2 in Limerick.

NPHET will have access to seven-day incidence figures, which are slightly more up to date and may point to a sharper rise in Dublin and Limerick relative to the rest of the country.

Yet the same HPSC reports shows the highest incidence in Dublin is in the southeast of the city, not the north or west, at 84.9.

Officials have access to more granular data on new case numbers in local electoral areas and, early in the pandemic, the HSE published a map showing where cases were occurring but this is not now published.

The department said yesterday it was “not feasible” for the HPSC to provide 14-day incidence rate breakdowns by electoral area, given its heavy workload. Even a request from The Irish Times for separate figures for Limerick city and county could not be met.

The department, which maintains it provides more geographic detail than many other countries, says moves are afoot to agree the best way to provide more detailed information without infringing confidentiality.

A separate report by the HPSC on clusters shows how, currently, this is a disease spreading within households. Last week, there were 122 new outbreaks in private houses and seven in extended families. The number of outbreaks in other locales was paltry – six in workplaces, three in residential institutions and two in nursing homes. There were no outbreaks reported in childcare facilities, hotels, cafes/restaurants, pubs or shops.

How bad do things have to get before restrictions are introduced? No one will say precisely, but a rough guide is provided by the traffic-light system in the health service. This is green up to an incidence of 20, orange up to 60, amber up to 120 and red thereafter.

Kildare reached a 14-day incidence high of 180 at one point before its lockdown, but with milder restrictions being envisaged these will probably be triggered long before that point.