Often undiagnosed haemochromatosis can be hereditary or caused by harmful drinking, infections 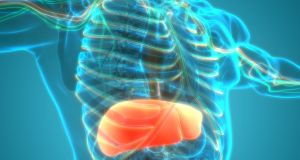 While some link was previously known between haemochromatosis, a condition which causes an iron overload in the body, and liver cancer, academics have for the first time quantified the threat. Photograph: iStock

A disorder very common but often undiagnosed in Irish people makes those with it ten times more likely to develop liver cancer, researchers have discovered.

While some link was previously known between haemochromatosis, a condition which causes an iron overload in the body, and liver cancer, academics have for the first time quantified the threat.

Haemochromatosis can be either hereditary or caused by the likes of harmful drinking, infections or other conditions.

The genetic type of the condition is more common in Ireland than anywhere else in the world, with one in 83 Irish people carrying two faulty genes which make them predisposed to the disorder.

One in five Irish people are believed to be carriers, who can pass it on to children.

A study by the University of Exeter, newly-published in the medical journal JAMA, suggests that more than seven per cent of men with two faulty haemochromatosis genes will develop liver cancer by the age of 75.

This compares to just 0.6 per cent in the general population.

“Every different ethnic group has associated with it certain preponderances for different aspects of health. Some groups are taller than others, some are smaller, for example, some groups have increased chance of certain conditions,” he said.

“In the Celtic bloodlines, it is more common to see certain diseases – like cystic fibrosis and haemochromatosis – than you would see in the global population.”

Despite the prevalence of the condition in Ireland, Dr O’Connor said many people know little about it.

“I don’t think many people in Ireland talk about the condition even though it is very common in our population,” he said.

“With one in 83 people predisposed, we probably all know someone who has it, and maybe they haven’t been diagnosed or aren’t aware that they have it.

“These findings show that people need to be attentive to the signs and symptoms of haemochromatosis.”

On average, one person is diagnosed with liver cancer in Ireland every day. While alcohol related damage is usually the most common cause, infection and haemochromatosis are the next most common causes.

Dr O’Connor said haemochromatosis can be successfully treated if detected early through blood transfusions as well as dietary and lifestyle changes.

The condition is less common in women because they lose iron through menstruation.

Symptoms can include feeling tired all the time, muscle weakness and joint pains, abdominal pains, loss of libido and changes in skin colour.

The University of Exeter research, carried out in collaboration with the University of Connecticut, Western University in Ontario, and South Warwickshire NHS Foundation Trust, was funded by the Medical Research Council in the UK, where there have been calls for widespread early testing for the condition.

Haemochromatosis can usually be diagnosed through blood tests.

Researchers analysed data from 2,890 men and women with two copies of the faulty gene, aged between 40 and 70 when the study began nine years ago.

Twenty-one of the 1,294 men have already developed liver cancer, with 14 of them having died from the disease. Ten of the 21 men were not diagnosed with haemochromatosis by the time they had a liver cancer diagnosis.

Prof David Melzer, who led the research team, said it was previously thought to be rare that men with genetic haemochromatosis died of liver cancer.

“We were shocked to find that more than seven per cent of men with two faulty genes are likely to develop liver cancer by age 75,” he said.

“Fortunately most of these cancers could be prevented with early treatment.”

But, he added, early diagnosis was a key factor.