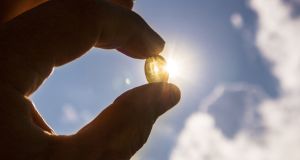 Concerns have been expressed that because people are spending more time indoors during the pandemic, their vitamin D levels may be even lower than usual. File photograph: Getty

Older people should take daily vitamin D supplements for their bone and muscle health, the Department of Health has advised.

In new advice, the departments says adults aged 65 and older should take a vitamin D supplement of 15 micrograms every day to maintain good bone and muscle health.

Some doctors believe vitamin D, by boosting the immune system, can help prevent or treat Covid-19. But the department says a study it commissioned on this issue found no evidence to support the claim.

The study by the Food Safety Authority of Ireland cited two British reviews that concluded there was no evidence to support taking vitamin D supplements to specifically prevent or treat the disease, and that the evidence on vitamin D supplementation and acute respiratory tract infection risk was inconsistent and generally did not show a beneficial effect.

However, since these reviews were completed, the UK government last month requested the National Institute of Clinical Excellence and Public Health England to produce recommendations on vitamin D for prevention and treatment of Covid.

“This link may actually lead to a cycle that sees people being frail due to low vitamin D status which then prevents them from being mobile and going outdoors and then in turn this further contributes to poor vitamin D intake.”

He said the new guidance would “help to prevent that cycle” and support older people to leave “happy and full lives”.

Vitamin D supplement can be taken as part of a multivitamin supplement, together with calcium or on its own. Vitamin D is naturally available from the sun, but natural intake varies seasonally and is also lower among people with high melanin, so people of colour are at higher risk of deficiency.

Concerns have been expressed that because people are spending more time indoors during the pandemic, their vitamin D levels may be even lower than usual.

Almost half the Irish population is deficient in the vitamin which is also available in foods such as oily fish and cheese.

Trinity College gerontologist Prof Rose Anne Kenny has argued that people have “nothing to lose”, and much to gain, by taking vitamin D supplements as protection during the Covid-19 pandemic.

Evidence linking vitamin D deficiency with severity of Covid-19 disease is “circumstantial but considerable”, she says.