Prescription drugs implicated in most deaths by overdose 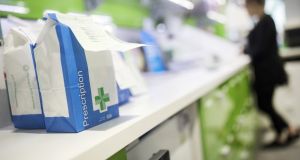 Prescription drugs were linked to seven out of 10 deaths, or 238, by overdose in 2016. Photograph: Simon Dawson/Bloomberg

Prescription drugs such as benzodiazepines are implicated in the majority of deaths by overdose, according to data compiled by the Health Research Board.

By contrast, just 5 per cent of drug-related deaths are among people who inject drugs.

The figures are contained in the National Drug-Related Deaths Index for 2016, which gathers data on deaths due to overdose as well as deaths among drug users due to causes such as cardiac arrest or hanging.

Benzodiazepines were the most common prescription drug group implicated in these deaths.

Deaths linked to pregabalin, a drug used to treat epilepsy and anxiety, have risen significantly, with an increase of 33 per cent between 2015 and 2016, from 49 to 65.

Overall, the index shows there were a total of 736 drug-related deaths in 2016 , similar to the number reported in 2015.

In all, there were approximately 21,300 of potential life years lost because of drug-related deaths during the 12-month period.

The annual number of deaths linked to overdoses decreased slightly in 2016, down 3 per cent over the previous year to 354.

Of illicit drugs, the index says the number of cocaine-related deaths has increased by 95 per cent since 2010, with 41 deaths reported in 2016.

The number of non-poisoning deaths rose slightly (382 deaths, up 3 per cent). The main causes were hanging and cardiac events.