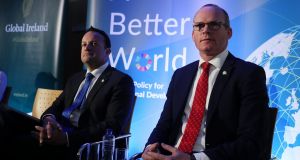 A ban on the use of Irish government aid money to fund abortion services in developing countries is likely to be set aside as a consequence of the changes to the legalisation on abortion in Ireland.

The Department of Foreign Affairs says it will launch a new initiative on “sexual and reproductive health and rights” in the developing world as part of the work of Irish Aid, the development aid programme of the government.

The new plan is likely to take account of the changed Irish position on abortion and will set aside a previous rule against funding abortion. The ban on funding for abortion was in place because of a rule that aid should not be used for purposes in conflict with domestic Irish policy. In the past, Irish embassies abroad have specifically requested of aid recipient countries that they do not use Irish funding for abortion services.

In a statement, the department said: “Coherence with our domestic policies has always been a key priority for Ireland in our international development programmes and this will continue to be the case.

“With regard to sexual and reproductive health rights, we are liaising very closely with other government departments, in particular the Department of Health, and we are currently engaged in analysing the implications of the changes in our national legislation for our work in this area,” the department said.

Following the repeal of the constitutional ban on abortion in the 2018 referendum, abortion services became legal in Ireland on January 1st of this year.

Previously, Irish Aid said that it did not provide funding for abortion services, and stipulated a condition for aid that it should not be used for such activities as they were in conflict with Irish law.

Last week, Taoiseach Leo Varadkar and Minister for Foreign Affairs Simon Coveney launched A Better World, a new policy on development aid which will guide the work of Irish Aid for the next decade.

It promised “a new initiative around sexual and reproductive health and rights”.

“Prioritising gender equality” is one of the four priorities of the new policy, along with “reducing humanitarian need”, “climate action” and “strengthening governance”.

Irish Aid provides support to a large number of countries but the department says that its main focus is on sub-Saharan Africa where it has long-term development assistance programmes in eight countries: Ethiopia, Mozambique, Uganda, Malawi, Sierra Leone, Kenya, Tanzania and Zambia. Irish Aid also has long-term programmes in Vietnam and supports work in South Africa, Zimbabwe, Liberia and Palestine.

Last year, Ireland spent almost €750 million on development aid, and has pledged to reach the UN target of 0.7 per cent of GNP by the year 2030. In cash terms this will require increases of €100-€150 million every year for the next 10 years, Mr Coveney said at the launch of A Better World.

He said Ministers discussed and approved the long-term commitments at the Cabinet meeting last week, and were committed to making the choice to fund projects in the developing world in the knowledge that this would impact on budgets at home. However, there is no statutory obligation to increase or maintain aid budgets which were cut back during the years of austerity.