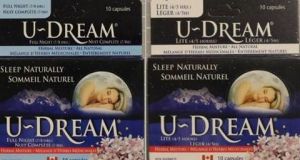 The Health Products Regulatory Authority (HPRA) has advised anyone who is taking the product, or who recently stopped taking it and has health concerns, to contact their doctor straight away.

Consumers using U-Dream products, marketed as herbal sleeping aids, have been advised to stop taking the capsules and consult their doctor immediately after tests found the product contained a substance similar to prescription medicine.

Canadian and American researchers have found the U-Dream Full Night and U-Dream Lite products, which are marked as natural sleep remedies, contain a substance similar to the prescription medicine Zopiclone which can cause drowsiness, dizziness and abnormal sleep behaviours.

The Health Products Regulatory Authority (HPRA) has advised anyone who is taking the product, or who recently stopped taking it and has health concerns, to contact their doctor straight away.

It also warned that those who stop taking the capsules abruptly could experience adverse reactions. And anyone currently taking the product should not drive, operate machinery or perform other activities “requiring mental alertness” until they have consulted their doctor.

While the U-dream sleeping aids are not authorised for sale in Ireland, packs of the capsules have been sold to consumers in Ireland from retail outlets including health stores, said HPRA. The authority said it had identified shops and online outlets selling the product to ensure packs are removed from sale.

Those who have already purchased either of the U-Dream products should return the pack to the store or contact the website where it was bought, said HPRA.

A statement from the U-Dream Sleep Naturally company said they had halted distribution of the capsules as a “precautionary measure” but argued the Zopiclone impurity 22 found in the products was not the same as the Zopiclone pharmaceutical sleeping aid.

The company said while there had been no confirmed cases of illnesses related to the U-dream product, it was advising all consumers to stop taking the capsules “immediately until further notice”.

HPRA’s investigation into the products is ongoing while the capsules have been recalled from the Canadian and US markets. The authority called on any person who has experienced an adverse reaction from taking U-Dream Full Night or U-Dream Lite to submit a formal report through hpra.ie.

1 Eyewitness to Auschwitz: ‘We were held in the wagons like animals’
2 Chinese virus-hit city of Wuhan closes transport networks
3 Eating out in Dublin – the homeless way
4 Chance for political ‘earthquake’ with non-FF or FG government- Boyd Barrett
5 Man who killed Jastine Valdez ‘looked possessed’ before shot by garda
Real news has value SUBSCRIBE