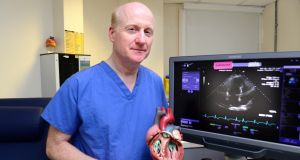 Heart disease and stroke continue to be Ireland’s biggest killers in spite of improved prevention and diagnosis and more effective treatment options, a consultant cardiologist has said.

Untreated or poorly-treated high cholesterol levels – which one in 12 people in Ireland are estimated to have – are the main causes of the problems, Prof Vincent Maher of Tallaght hospital said.

“Most people are completely unaware of their cholesterol risk until it is too late,” he said.

Prof Maher said that by “too late” he meant that people ended up having a heart attack or stroke or needing treatment such as a bypass, stent, surgery or amputation.

Raised LDL cholesterol – or “bad cholesterol” – has causes atherosclerotic cardiovascular disease; the build-up of plaque in arteries. Plaque is made up of fat, cholesterol, calcium, and other substances in the blood. Over time, plaque hardens and narrows arteries which limits the flow of oxygen-rich blood.

Lowering bad cholesterol lowers the risk of heart and vascular disease (including vascular dementia, caused by problems in blood vessels feeding the brain; a risk that grows as people get older) and the outcome is best if intervention is early, Prof Maher said.

“Raised cholesterol levels silently damage blood vessels on a daily basis depending on the degree of raised cholesterol and the number of associated risk factors such as high blood pressure, diabetes, smoking and a family history.”

Prof Maher said exercise, minimising stress and having a balanced diet were best ways to reduce the risk of a lifelong burden of elevated cholesterol.

While most people go around unaware, he said, others who know they have high cholesterol may not be adequately treated due to drug intolerances, drug ineffectiveness, other illnesses or severe genetic abnormalities which lead to extremely high cholesterol levels which commonly used drugs fail to reduce to acceptable levels.

“To address these issues, we plan to develop the first advanced lipid [cholesterol] management and research [ALMAR] Centre in Ireland – to be based at Tallaght hospital,” he said. “This unit will be equipped to perform specialised assessments and provide state-of-the-art treatments; it will also act as an educational centre and link with the community.”

For starters, he said, it would be ideal if two of such centres were based in Dublin and others in Cork and Galway.

A team including a specialist nurse, vascular technician and physician would cost €100,000 a year to run.

“We are developing a prototype in Tallaght and saying, ‘this is what can be achieved; this is what it costs’. Access to specialised therapies requires dedicated centres and hence our efforts to build the first one in Ireland.”

Fundraising cycles to support the proposed centre are taking place soon. The 960km cycle is taking place in two legs – from Malin Head to Mizen Head (June 30th to July 4th) and from Dooagh, Co Mayo, to Dublin (July 7th to 9th).