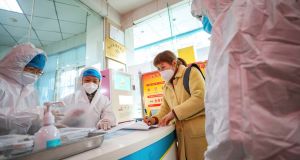 Medical workers in protective gear talk with a woman suspected of being ill with the coronavirus at a health station in Wuhan, central China’s Hubei Province, on Monday. Photograph: Chinatopix via AP

Preparations are under way to evacuate Irish citizens trapped in the Chinese region at the epicentre of the coronavirus outbreak.

As the death toll in China reached 82, the Department of Foreign Affairs said it was exploring options, “including commercial options”, for assisting Irish citizens to leave Hubei province, “if required”.

However, the offer poses a dilemma for those in the stricken city as their Chinese partners would be left behind and anyone leaving would face another period under quarantine once they got out of the affected area.

“The Embassy is in contact with Irish citizens in Hubei province regarding their intentions,” a spokeswoman told The Irish Times.

It is estimated there are eight Irish citizens in the affected region, which has been in effective lockdown since the Chinese authorities imposed severe transport restrictions in an effort to prevent the spread of the virus.

On Monday, the mayor of Wuhan, in Hubei, acknowledged criticism of his handling of the crisis, and offered to resign. There is growing anger among residents that they were not informed earlier about the risk posed by the outbreak, which is thought to have begun in December.

The number of confirmed cases has reached almost 3,000, with 400 of these critical. The number of suspected cases now stands at more than 5,700, but experts believe thousands more could eventually be infected.

Members of the Chinese community in Ireland have expressed concern about the presence here of a tour party from the region of the country where the coronavirus originated.

The group left China before restrictions were imposed on travel there, came to Britain and then travelled on to Ireland on the ferry from Holyhead at the weekend.

Chinese social media posts show a woman member of the group posing at various landmarks, including Trinity College in Dublin and the Titanic Centre in Belfast.

“We are the only tour from Wubei that can travel in UK. That’s not easy,” the woman posted on Weibo, a social media site. She also posted a picture from the Holyhead ferry, on which members of her group had played poker.

While there is no evidence the group posed any health threat, its presence in Ireland prompted criticism on Chinese social media. One poster warned the community in Ireland, and in particularly Chinese restaurants, to “be aware” of their presence.

“We have experienced Sars, but people in the Irish Government haven’t . . . personal and household hygiene is so important,” a member of the Chinese community in Ireland who expressed concern about the visit told The Irish Times. “They think the Ireland is safe, [but] I doubt the hospital capacity.”

Medical suppliers are reporting a big jump in demand for surgical masks in response to the coronavirus outbreak in China, with some Dublin stores saying they have run out of stocks.

Demand has been particularly high among the Chinese community, especially from those who travelled home to mark the Chinese New Year at the weekend.

The Department of Health said its National Public Health Emergency Team met on Monday to review the ongoing preparedness of the Irish health system for any cases of the virus that occur in Ireland. A statement gave no details of the group’s deliberations but pointed out that no confirmed cases had occurred here.

Waterford Institute of Technology said one of its students was in self-isolation after travelling from Wuhan at the weekend. The man is not ill and has agreed not to attend college as a precaution.