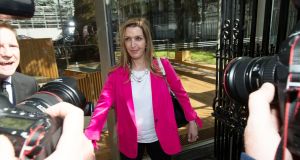 Vicky Phelan arriving at the Dáil prior to her appearance before the Public Accounts Committee to discuss the controversy last month. File photograph: Nick Bradshaw

More than 23,000 people have contacted the Health Service Executive’s CervicalCheck programme helpline since it was set up at the end of April when controversy erupted over the failure to tell some women about inaccurate smear test results.

The helpline was established after it emerged that at least 162 women with cervical cancer had not been informed about CervicalCheck audit results and past false tests. Of 209 women who could have had earlier intervention in light of false tests, 18 have died.

The issue was highlighted when 43-year-old mother of two Vicky Phelan, from Annacotty, Co Limerick, settled a €2.5 million action against a US laboratory which provided her with an incorrect smear test result. She took proceedings after it emerged her 2011 smear test, which showed no abnormalities, was found, in a 2014 audit of smear tests on a number of women, to be incorrect. She was not told until September 2017. She now has terminal cancer.

In a statement on Friday night the HSE said its helpline set up in the wake of the debacle continues to operate.

Since April 28th, 23,428 calls have been answered from women, and the HSE has received 11,551 requests for calls to be returned.

The HSE said they have teams working within screening services and in hospitals across the country, making contact with all of the women who have requested a call back, and to date 14,492 calls to women have been made.

At this stage contact has been made with 208 of the 209 women or their families who were impacted.

“The needs of the women are diverse, and a range of services is being made available to all women, tailored to their individual needs and circumstances. This includes medical cards, physiotherapy, occupational therapy, home care packages, counselling, disability services, medication, transport and childcare costs and other supports,” the HSE said.

The statement also said the HSE has been working with the National Cancer Registry of Ireland and the Department of Health “to identify any other women who had cervical cancer since 2008, who may also have had a CervicalCheck test. The HSE is finalising the matching process with the National Cancer Registry, and it is expected that this can progress to the next stage early next week.

“This will involve a review to be carried out under the auspices of the Royal College of Obstetricians and Gynaecologists with expert input from the British Society for Colposcopy and Cervical Pathology.

“The HSE will agree a communication process with this international clinical expert review panel for those women identified by the National Cancer Registry matching process.”

Meanwhile a scoping inquiry into the CervicalCheck controversy headed by Dr Gabriel Scally, has commenced its work.

Dr Scally was appointed by the Government to assess the facts surrounding the controversy and is due to report by the end of June.