Food Safety Authority orders 11 closures during May, the highest of the year so far 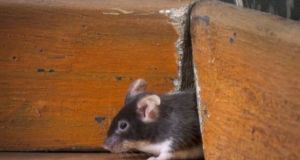 There was “prolific evidence” of mice droppings observed in the premises including on all food shelving in the Co Wexford premises.

A “luxury homemade dessert” business has been ordered to close after food safety inspectors discovered nine dead mice in its production area, and mouse droppings on baking trays.

Sweetness Luxury Homemade Desserts in Ardcavan, Co Wexford, was the subject of an inspection by environmental health officers with the Health Service Executive (HSE) in May.

One of the dead mice was found in the small store directly off the cold room, while another was observed in a store area behind the partition wall adjacent to the main oven.

There was “prolific evidence” of mice droppings observed in the premises including on all food shelving; on the floor beside the open food packaging shelving; and at all wall/floor joins throughout the dispatch area that opens into the food production area.

Droppings were also observed on shelving and amongst electrical cables and files on the floor of the office in the food production area.

More were observed in baking trays on a trolley stored beside the main oven and adjacent to the wall cladding where other mice droppings had been identified in the production room.

The Food Safety Authority of Ireland (FSAI) has ordered the business to close for breaches of food safety legislation.

Sweetness Luxury Homemade Desserts was one of 11 businesses ordered to close during the month, which was the highest number of any month this year.

Another business, Addison Lodge in Glasnevin, Dublin, was told to close its doors after dead and live crawling insects including earwigs, woodlice and spiders were found on the premises.

The FSAI said these posed a risk to food safety as insects can transmit disease. Live flies were noted throughout the premises and the windows were left open.

There was also a build up of ingrained grease, dirt, food debris, and dust. Additionally a “foul odour” was noted emanating from the grease trap in the kitchen.

A closure order is served where it is deemed that there is or there is likely to be a “grave and immediate danger” to public health at or in the premises. They can refer to the immediate closure of all or part of the food premises, or all or some of its activities.

1 Harris agrees with PSNI that army council still oversees both Sinn Féin and IRA
2 Drug dealer loses codes for €53.6m bitcoin accounts
3 Varadkar says any Fine Gael deal would have to recognise strength of its vote
4 MV Alta: The unmanned voyage of the Ballycotton ‘ghost ship’
5 The close links between Sinn Féin and IRA untangled
Real news has value SUBSCRIBE