Synthetic cannabis may increase risk of stroke in young users 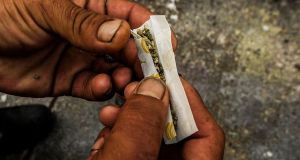 Known as “spice” or “k2”, synthetic cannabis has been consumed in growing quantities since it was introduced in Ireland through head shops over 10 years ago. Photograph: iStock

Consuming synthetic cannabis, which is illegal and widely used in Ireland, may increase the risk of a stroke in young users, doctors in the US have warned.

The warning is contained in a BMJ Case Reports study published on Thursday night, and follows their treatment of a 25-year-old prison inmate who had no family history of heart disease or traditional cardiovascular risk factors but was found collapsed with a ‘suspicious’ looking substance at his side.

A scan revealed an extensive area of stroke and swelling in the brain while a heart trace showed evidence of a previous heart attack.

He was left with a permanent disability with doctors attributing his stroke and heart attack to his use of synthetic cannabis.

Known as “spice” or “k2”, synthetic cannabis has been consumed in growing quantities since it was introduced in Ireland through head shops over 10 years ago but increasingly it is sold online in a variety of formulations.

The authors who are based at the University of Buffalo and Roswell Park Cancer Institute in New York accepted they have cited only one case, but said it backs up other studies which have linked synthetic cannabis use with a heightened risk of heart attack/stroke. They also noted its low cost and ready availability was fuelling an increase in its popularity.

Synthetic cannabis has been linked to a wide range of other reported side effects including anxiety; psychotic episodes; rapid or slowed heartbeat; chest pain; low blood pressure; fainting; kidney damage and inflamed arteries and veins in hands and feet.

Greater awareness of the dangers of synthetic cannabis use was needed, they suggested. In addition, development of tests to detect these drugs and identify populations at risk were required, they added.

“However, the diversity among different drugs under this common umbrella of ‘synthetic marijuana’ will remain a barrier to successful testing of all chemicals with a single battery of tests,” they concluded.

1 How fraudsters used lockdown to lure Irish victims into boats and caravans scam
2 Miriam Lord: Minister for Agriculture tries to get himself out of the manure
3 Garda detective charged with making death threats against ex-partner
4 Martin criticises ‘over-focus’ on Border poll ahead of Foster meeting
5 Coronavirus: One more death and 24 new cases reported in the Republic
Real news has value SUBSCRIBE