One of the women affected by CervicalCheck controversy, Walsh says she has no confidence in process 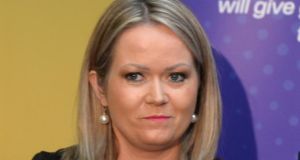 Patient advocate Lorraine Walsh, one of the women affected by the CervicalCheck controversy, has resigned from the steering committee of the screening programme. Photograph: Dara Mac Dónaill

Patient advocate Lorraine Walsh, one of the women affected by the CervicalCheck controversy, has resigned from the steering committee of the screening programme.

Speaking on RTÉ’s Primetime on Tuesday night, she revealed two of the three cases dealt with by RCOG in which mislabelling of slides occurred involved her own slides and those of fellow patient advocate Vicky Phelan.

Referring to the erosion of her own trust in the process, she called on the Government to fund “individualised, independent assessments” for affected women “so they can get the truth”.

Ms Walsh was tested under CervicalCheck but abnormalities were missed, forcing her to have invasive treatment, as a result of which she is unable to have children.

“The revelations of the last number of months have forced me to examine my own conscience and when it got to a stage where I couldn’t sleep at night, I had to resign,” she said.

“I spoke to the Minister for Health about my concerns. But I felt I got to a stage where no-one was listening to my concerns, so I had to resign.

“I could have avoided the treatment, I could have had the family that we desperately wanted, my life and my body would have been completely different had that smear been read correctly. We’ve been robbed of what we wanted. We can’t have children because of it. It changed our lives forever.”

Referring to the review, she said reports had to be returned to RCOG because of consistencies and inaccuracies. “Even as late as early October, of 581 reports, half of them had to be returned because the detail in them was inaccurate.”

She said she raised her concerns with the steering committee and the Minister for Health “but no-one seemed to be listening to me” and she had to resign.

“Out of 1,051 slides [reviewed by RCOG], for two of them to be mine and Vicky Phelan’s, it just erodes confidence further in the entire system.”

When she received her report from RCOG in November and raised issues about it, she was provided with another, different report “within 24 hours”.

While still expressing confidence in the screening process, she called on the Government to now fund “individualised, independent” assessments for affected women “so they can get to the truth”.