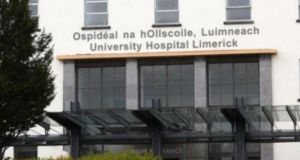 UHL is consistently the most overcrowded hospital in the State

Creche-owners should tell parents their children must be vaccinated before they can be enrolled, Minister for Health Simon Harris has said.

Mr Harris said there is nothing stopping crèches making it a requirement for young children to be vaccinated before they can be enrolled.

The Minister’s wish for restrictions on unvaccinated children attending school has foundered on legal obstacles, with the attorney general advising this would not be possible due to constitutional provisions on education.

But speaking on Wednesday at the Oireachtas health committee, Mr Harris pleaded with Early Childhood Ireland, which represents groups involved in childcare, to introduce a requirement for young children to be vaccinated in crèches and other centres of care.

A vaccination requirement for pets was “the norm”, he pointed out.

Early Childhood Ireland said later it is currently consulting its members on the issue of vaccination, and declined to comment prior to the completion of this process.

Mr Harris was responding to questions from his party college, Kate O’Connell, who said measures had to be ready to protect the population in the event of a threat from measles or other infection diseases.

Referring to the current mumps outbreak, Ms O’Connell said this will result in young men in “the Wakefield generation” with fertility problems as a consequence of their parents’ decision not to have them vaccinated when they were young.

The uptake of the MMR vaccine dipped about 20 years ago after Dr Andrew Wakefield alleged a link to autism. His theory was subsequently debunked but it took some years for vaccinations figures to recover.

Mr Harris has asked the Health Research Board to report on the approach taken by other countries in relation to mandatory vaccination and report is due shortly.

The consent of parents is required for vaccinations of children and young people up to the age of 16.

Speaking earlier at the Committee, Mr Harris said senior doctors in University Hospital Limerick (UHL) need to “get in their cars” and carry out work in smaller hospitals in the mid-west.

The amount of private practice carried out in UHL is greater than in the average hospital, he told the Oireachtas health committee.

The Minister was responding to questions from Labour health spokesman Alan Kelly, who said there was “catastrophic” overcrowding in UHL and as a result, people were “afraid” to visit it.

Mr Harris said he accepted there are serious capacity issues in the hospital, but he added what was needed was for more doctors from UHL to go to smaller hospitals. Apart from surgeons going to St John’s Hospital in Limerick, this was “not happening”.

UHL is consistently the most overcrowded hospital in the State; this morning, for example, it has 76 patients waiting for admission, more than in any other hospital.

A new 60-bed block is being built but won’t be ready until later next year. A second CT scanner has been ordered and is expected to arrive in UHL this week.

Mr Harris said 15 new beds would open in St John’s next week, but he added that some other hospitals in the region had yet to make submissions to the HSE for additional beds.

Mr Kelly described the resources allocated to UHL as “discriminatory” compared to other hospitals of a similar size.

Up to 190 extra hospital beds are to be opened in the coming weeks to alleviate pressure on overcrowded emergency departments, Mr Harris told the committee.

An initial tranche of 107 new beds are to be opened in Letterkenny, Tullamore, Waterford, Cork, Limerick, Tallaght and in the children’s hospitals in Dublin, he said.

According to Mr Harris, the National Treatment Purchase Fund (NTPF), which is funding the extra beds from its Government allocation, is continuing to engage with hospital groups to finalise the details of the additional bed capacity.

Meanwhile, the cost of attending one of the 11 minor injury units across the State is to be reduced from €100 to €75 from next week, he told TDs.

The reduced fee is designed to encourage would-be patients to go to minor injury units rather than hospital emergency departments.

Mr Harris said that from next year the NTPF is to expand its services to include arranging full packages of care for patients, to include surgery or treatment as required.

He has written to the HSE following the publication last week of the UK Royal College of Obstetricians and Gynaecologists review of tests carried out by CervicalCheck to ensure its recommendations are “considered” and HPV screening is successfully introduced in the first three months of next year.

Mr Harris also promised to put in place an “independent, compassionate process” to listen to the voices of women suffering from vaginal mesh complications.

The HSE is €319 million over budget this year, with almost 40 per cent of this sum occurring in operational areas under the control of the health services, according to HSE director general Paul Reid. This is about half the figure recorded a year ago.