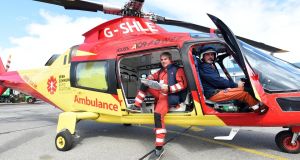 Ireland’s first charity-led air ambulance service has launched a major fundraising drive to meet its annual €2 million running costs as it revealed it has already carried out more than 100 missions in just two months.

“The service was tasked with its 93rd mission last Tuesday and since then we have gone over the 100-mission mark but this is a community funded service and we need some €2 million annually to support it,” he said.

“I am delighted to announce that an experienced fundraiser and charity sector leader, Lynda Stopford has been recruited as ICRR’s new COO [chief operating officer] and she will lead the fundraising campaign,” he added.

Mr Conlon said the ICCR was launching a public appeal for funds involving a nationwide raffle called “Flight for Life” which he hopes will also highlight the availability of the services for communities across Munster and south Leinster.

One of the major prizes in the raffle will be a “once-in-a-lifetime helicopter trip from Italy to Ireland”.

The new charity service was officially unveiled by Tánaiste Simon Coveney at its base at Rathcoole near Millstreet in north Cork last month when he hailed it as a major addition to the emergency services in Munster.

Martin Dunne of the National Ambulance Service said they were delighted to be involved in the service.

The service, which is provided by a team of two pilots, five advance paramedics and four emergency medical technicians working a rota, uses an Agusta Westland 109 Power helicopter operated by Sloane Helicopters.

Mr Conlon, who said that the charity is also making contact with companies and business leaders to secure funding, said the ICCR had recently acquired a back-up helicopter.

“The back-up helicopter came into use last week while the main helicopter was undergoing routine servicing. It will remain at the air base as a back-up aircraft, as is normal for an Air Ambulance service.”

The service plans partnerships with some with major public events and community-based fundraising to meet its €2 million running costs, he said.

Coronavirus: Donations to Catholic Church down 80% 04:35
Covid-19: Travel restrictions to stay and 'green list' put on hold amid fears of second wave 04:05
Friends of Sinn Féin raises a further $294,790 in the US 03:01
Traditional census may be replaced by online data collection 02:30
Bookings are coming, says Cork travel agent, ‘but it’s a trickle’ 01:02

1 Covid-19: Travel restrictions to stay and 'green list' put on hold amid fears of second wave
2 Bobby Storey: The IRA's planner and enforcer who stayed in the shadows
3 Transgender Cork farmer (65) surprised at positive response to telling her story
4 Miriam Lord’s Week: Martin sparks Olympian levels of whingeing in Fianna Fáil
5 Q&A: How close are we to having a Covid-19 vaccine?
Real news has value SUBSCRIBE