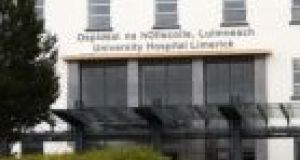 Over a thousand patients have been forced to wait on trolleys in University Hospital Limerick this month, according to the INMO. This is already the worst September on record for the hospital.

The Health Service Executive spent almost €94 million on agency staff in the first seven months of the year, new figures show, despite repeated promises to reduce dependency on temporary workers.

University Hospital Limerick had the highest spending on agency staff, at more than €1 million a month, according to figures obtained by Labour party health spokesman Alan Kelly.

Overcrowding at UHL hit record levels again on Monday, with 81 patients waiting for admission in its emergency department in the morning.

This is the third time this year the hospital has recorded the highest level of overcrowding of any Irish hospital, following previous spikes in April and July.

Mr Kelly said his figures showed UHL staff were “under serious pressure” and that the HSE was embarking on a recruitment embargo “whether or not they want to admit it”.

“Staff still aren’t being hired in key posts which are remaining empty or being filled by an agency staffer. The figures show that the HSE would rather spend money on agency staff than employ people on full-time contracts. This is not good enough.”

The Irish Nurses and Midwives Organisation, which counts patients waiting for admission nationally as part of its TrolleyWatch monitoring, also blamed the latest problems on understaffing.

“There are a hundred unfilled nursing posts at the hospital, and the HSE are not allowing management to recruit graduating nurses and midwives. The recruitment ban has got to go,” said INMO industrial relations officer for Limerick Mary Fogarty.

“Our members are looking to winter with a sense of dread. If this is what’s happening in temperate months, things can only get worse as accidents and illnesses increase in colder weather.”

Ms Fogarty called for services to be curtailed in order to clear the overcrowding. “This is a matter of public safety. Eighty-one patients on trolleys is what you’d expect after a natural disaster, not on an ordinary Monday. It’s time for direct, high-level HSE intervention.”

Over a thousand patients have been forced to wait on trolleys in UHL this month, according to the union. This is already the worst September on record for the hospital, with a week still remaining.

Last year, UHL was also the most overcrowded hospital, with 10,000 patients waiting without beds.

Across the country, 534 admitted patients were waiting for beds on Monday morning; 382 in emergency departments, and 152 in wards elsewhere in a hospital. Cork University Hospital had 62 patients waiting for admission.

Expressing regret at the delays, the hospital said one reason was higher patient volumes, with many requiring isolation.

“UHL does not have adequate isolation facilities and this unfortunately impacts on patient flow,” a spokesman said.

Bed capacity in Limerick was lower than in comparable hospitals, he claimed. A new 60-bed block will open at the end of next year.

In relation to staffing, he said the UL Hospitals Group has recruited 48 graduate nurses and midwives in recent weeks.