Seven out of 10 patients recovered from virus, figures reveal 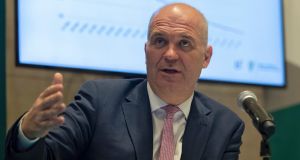 Residential care settings account for 4,363 cases of coronavirus, of which 3,457 are in nursing homes, according to new figures from the National Public Health Emergency Team (NPHET).

There have been 697 deaths in residential care settings, comprising 547 laboratory-confirmed cases of Covid-19 and 150 probable/suspected cases.

In nursing homes alone, there have been 593 deaths, made up of 458 laboratory-confirmed cases and 135 probable/suspected ones.

A census of deaths in residential care settings from the start of the year to April 19th revealed 586 Covid-19 deaths in nursing homes, 16 in disability centres and 14 in mental health units, according to Dr Kathleen MacLellan, assistant secretary of the Department of Health.

There were 616 virus-related deaths in these settings out of total deaths of 3,368 over the period.

“From the end of March we have seen an increase in deaths in this sector that can be attributed to Covid-19,” she said. Ireland is one of the few countries collecting and reporting data from long-term residential care settings since the start of the pandemic, according to Dr MacLellan.

Seven out of every 10 patients diagnosed with Covid-19 have recovered from the disease, according to NPHET.

The deaths of another 31 patients diagnosed with Covid-19 were reported by NPHET at its briefing yesterday. There have now been 1,190 Covid-19 related deaths in the Republic.

An analysis of deaths shows 87 per cent had underlying conditions and 53 per cent of cases were in men. The median age of deaths was 83.

Chief medical officer Dr Tony Holohan said he did not believe the circumstances were in place for an easing of restrictions.

Citing the almost 400 new cases reported yesterday, he said “the experience we’re having in the overall population is not quite at the level we’d like to be” for restrictions to be loosened.

Dr Holohan said he did not anticipate any significant change in NPHET’s stance on the issue in the coming days, though he added there were still five or six days to go before the current restriction period ends and “we’re hoping we’ll see progress”.

The number of cases associated with healthcare workers now stands at 5,568. Of the 356 admissions to ICU, 129 patients remain there and 173 have been discharged, while 54 patients have died.

Some 83 per cent of patients in ICU had underlying conditions and the median age was 60. There are now a total of 369 clusters of the disease in residential care settings, including 219 in nursing homes, NPHET reported.

Dr Holohan, said NPHET would give further consideration to the issue of mask-wearing in the general community at its meeting tomorrow.