Coronavirus: ‘It is like fighting an invisible beast’ says nursing home care director

Two residents died, but nine others who tested positive are now getting better 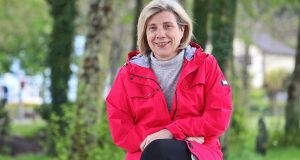 Geraldine Donohoe of Oak View Nursing Home, Belturbet, Co Cavan. ‘We have had no new symptoms since the 20th, so please God we’re getting there,’ she says. Photograph: Lorraine Teevan

For Geraldine Donohue, the darkest moment was when her second resident died.

“She was a beautiful person, so gorgeous a lady, and I just thought, how am I ever going to beat this?”

As director of care at Oak View Nursing Home in Belturbet, Co Cavan, Donohue is responsible for 58 residents. Two have died of Covid-19, and nine more have tested positive for the virus.

“It’s like fighting an invisible beast,” says Donohue. “It is tough, I’m not going to deny it. You’re living on your nerves, on adrenalin all the time, and thinking we have to just keep at this, and get us out of the outbreak situation.”

Yet of those nine residents, all are getting better. “It’s a real feel-good factor for the staff who are caring for them because they can see them improving all the time, thank God.”

According to figures released on Tuesday, half of all probable and confirmed coronavirus deaths in the State were among residents of nursing homes. There were 3,277 confirmed cases and outbreaks in 218 homes – equating to 40 per cent of all such homes.

“We have been getting such a bad press [in nursing homes], which is extremely hard on staff morale, but I can’t speak highly enough about my staff, I’m in total awe of their professionalism and their dedication,” says Donohue.

Nursing homes “weren’t the priority. We should have been right up there with the acute sector.

“I do think we are thought of [as] second-class citizens, because they’re ‘only nursing homes’, but we are frontline workers as well,” says Donohue.

In Co Cavan there are 627 cases; in the past three weeks, the incidence of Covid-19 has risen by up to 820 per cent in Border counties in the northeast, and Cavan surpassed Dublin as the county with the most cases relative to population.

However the chief medical officer, Dr Tony Holohan, said this is unlikely to be due to a “spillover” from the North, and the Health Service Executive (HSE) chief clinical officer, Dr Colm Henry, said there were a number of factors, including an outbreak at the hospital and cases in residential facilities and congregated settings.

Their proximity to the Border is not a factor for Donohue. Oak View has been closed to visitors and new admissions since March 6th; she and her staff “go from work to home, and the only other thing we do is a weekly shop”.

Their first fatality was on April 4th, a resident who had returned from hospital the previous day; now, “we’re on high alert all the time,” she explains. They are taking temperatures and checking residents’ vital signs twice a day. “This is our normal life.”

There is good news. “We have had no new symptoms since the 20th, so please God we’re getting there.”

Donohue’s concerns now are about what happens next. “I have to think this can’t be endless. We have to see a light at the end of the tunnel, so where do I go as director of care to maintain the safety of the residents but also to allow them visits?”

There must be direction, Donohue says, but admits to being “fearful of the doors being opened again”.

“How am I going to manage this going into the future? I don’t think anyone has the answer yet, but I do think that is a discussion that’s going to have to take place sooner rather than later.”

Calls for clarity over policing of face coverings on buses, trains