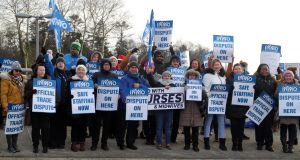 Nurses began their campaign of industrial action yesterday buoyed up by widespread public support, but whether this can be maintained remains to be seen.

Whether it was motorists beeping at pickets, or trending social media posts, there was little doubting the initial one-day strike by members of the Irish Nurses and Midwives Organisation seeking a 12 per cent pay increase, enjoyed widespread backing.

Prominent doctors lined up to support their fellow health professionals. Letterkenny orthopaedic surgeon Peter O’Rourke said nurses had been badly paid for years and should not be subjected to “moral blackmail” to call off their strike due to cancellation of patient appointments.

Tallaght gastroenterologist Anthony O’Connor tweeted that it was “time to value” nurses, “the glue holding our bockety old system together”. Accusing the Government of “clinging to money saved from their cuts like their Communion money” he contrasted this with the “obscene and absurd” overspending on the national children’s hospital.

Meanwhile, Dr Cliona Murphy, chairwoman of the Institute of Obstetricians, called for an acknowledgement that female occupations are paid less than male ones. The average pay for a nurse was only €3 an hour higher than that of a babysitter, she claimed.

Many doctors working in emergency departments, where the absence of nurses during industrial action is most keenly felt, were also supportive, but struck a wary note. Dr Fergal Hickey of the Irish Association for Emergency Medicine, for example, warned that if the strike was allowed continue, tempers and relationships were bound to fray and difficulties would ensue.

“There is sympathy for the nurses,” says Stephen McMahon of the Irish Patients’ Association, “but that could shift depending on the impact of industrial action as it continues. If that happens, support for their case could be diluted in the court of public opinion.”

The strike is coming on the back of serious problems in the health service, including the trolley crisis, the widespread cancellation of elective work during winter and staff shortages, he points out.

So that the public can properly decide on the merits of the nurses’ case, clarity is needed on the “real cost” of their pay claim, and on any knock-on claims it may engender, he says.

Trade unions representing other health professionals maintained the traditional silence yesterday when a fellow union is undertaking industrial action, but there is no doubt they are watching the situation with grim intent.

Last week, Forsa, in advising its members not to undertake nurses’ work during their strike, took the opportunity to warn of the pressure for further pay claims if “some groups of workers” are granted pay benefits beyond those in the public sector pay agreements.

Pointedly, it also noted official reports had found that staff retention problems were worse in the health and social care professions it represents than in nursing.