‘It is so demoralising to work side by side with colleagues, doing exactly the same work’ 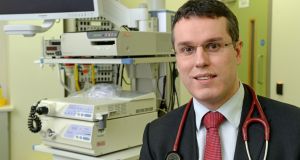 Oisin O’Connell, lung consultant at the Mater Hospital: “When you are under pressure and trying to do the best you can, discrimination only adds to the pressure.” Photograph: Eric Luke

“I’ve fought hard to get where I am. My career is 20 years in the making, and all I want now is fairness,” says Noirin Russell, an obstetrician at Cork University Maternity Hospital.

Russell was appointed to her position just three months after the then Fine Gael-Labour coalition imposed a 30 per cent pay cut on new consultants in 2012. She mightn’t have missed the deadline were it not for the maternity leave she took for the births of two of her children.

“I feel hard done by, doubly discriminated against for being young and for having a family,” she says. “It is so demoralising to work side by side with colleagues, doing exactly the same work to the same level of competence, but to be paid significantly less.”

Her union, the Irish Hospital Consultants Association, says it plans to challenge the discriminatory pay scales in the courts. It says members with up to 15 years’ postgraduate specialist training are working for 25 per cent less than older consultant colleagues and will never attain pay parity.

Russell starts work at 7.30am and is home by 7.30pm on an average day. She does one weekend and one weeknight on-call each month.

Having trained in France at a financial loss and with health challenges within the wider family, she says she has “huge debts” to pay off and can ill-afford the pay inequity she suffers.

Although she has obtained increments in recognition of additional qualifications, she is still down about 16 per cent compared to colleagues.

“I’m never bored a day in work. It’s a privilege to be looking after women in pregnancy. But just pay us all the same. I have no expectation of a fat cat lifestyle. I just want to be valued.”

She recently asked her nine-year-old son what he thought of his mother’s job: “He said the best thing was that if he fell, I knew what to do about it. The worst thing was when I didn’t come home for dinner.”

Oisin O’Connell, a consultant working at the national heart and lung transplant service in the Mater Hospital, is on-call about 150 times a year. That means that, on every second night, he has to be within 20 minutes of the hospital and ready to come in to work at any time of the night.

His job involves dealing with the post-surgery medical complications of transplant patients. With no room for being late, he has on occasion needed Garda escorts to rush him into emergency situations. He also works through every second weekend and, when his colleague is on holidays, he is on call every single night.

O’Connell went to medical school in Cork, trained in respiratory medicine and worked for spells in places such as New Zealand and Texas before coming home to take up a consultant post at the Mater Hospital in July 2015.

Like many doctors who have trained abroad, he is quick to contrast the “phenomenal” resources he has witnessed in other health systems – in his case, hospitals in Houston and Toronto – with the “huge stresses on the ground” back at home.

Over a decade the team in the Mater has pushed up the number of transplants it performs from four to 12 a year, but O’Connell says the number of associated beds has remained stuck at seven. His office is in one of the unused patient bedrooms.

Today, up to 35 lung transplants are carried out every year in the Mater, the fourth highest rate in the world relative to population.

He also earns less than more established colleagues, having joined the HSE after salaries were cut in 2012. The cut was partially reversed in 2014, but the HSE and the medical organisations disagree over the extent of the row-back.

At 36, he has already racked up 17 years of training, during which he was on no or low pay.

O’Connell believes the kind of pay inequity he and other younger consultant colleagues experience amounts to an affront to fairness within society. He cites experiments scientists have performed with monkeys who showed themselves fundamentally averse to being rewarded differently from their peers for doing the same tasks.

“When you are under pressure and trying to do the best you can, discrimination only adds to the pressure.”

Almost half of his old training colleagues are abroad now and O’Connell needs more than one hand to count the number of job offers he has received in the past year – “two in Canada, two in New Zealand, two elsewhere in Ireland”.

He believes the public has little idea of the number of hours worked by people in his position as a result of under-resourcing. They also wrongly assume that change in healthcare is linear, when the complexity of the case being offered is actually increasing “in exponential terms”.

“Ireland is no longer regarded as an attractive place to work. Yet I chose this job, and this life. I’m not looking for sympathy, just an end to discrimination.”