Now for the tricky bit: ‘We need to move from a state of fear to being cautious’ 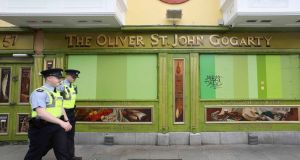 And now for the tricky bit.

After months of national solidarity during an abrupt but clearly defined lockdown, followed by a summer lull when transmission rates were low, Covid-19 is back and circulating in all counties, age groups and sectors of society.

Errors and miscommunication have been the hallmarks of the Government’s response since it took office two months ago; anger and frustration the characteristic emotions expressed by a restriction-weary public.

The extent of the State’s sudden reversal of fortunes was laid bare during the week when Sweden’s incidence of the disease dived below that of Ireland. Six months after closing our schools, we’ve ended up with more Covid-19 cases than the Scandinavian poster-boy for a light-touch response to the pandemic, which saw most of its schools stay open throughout.

Other countries in Europe are battling a second surge of the virus, in most cases driven by returning holidaymakers – something that is not the case in Ireland due to heavy restrictions on travel.

Ireland’s incidence of the disease on Friday was worse than that of 19 of our European neighbours, according to the latest update from the European Centre for Disease Control.

The reasons for this were laid bare in a punishing critique from Social Democrats leader Róisín Shortall in the Dáil during the week.

“The early response was fine but it took its eye off the ball,” she argued. “There are a whole lot of gaps in our response. Nobody knows what the strategy is now in respect of Covid.”

Shortall set out three ways the Government “is not playing its part – the need to honour its commitment to ensure we have an effective testing and tracing system in place; to ensure we have proper controls at our airports and ports; and to ensure that open information and data are made available, and that they would drive the policy in this area”.

Critics of Ireland’s approach range from people seeking the complete elimination of the virus to those calling for a greater reopening of the economy despite the fact that it is circulating. But both sides agree that Ireland is falling down on the central tasks of testing, tracing and isolating people.

Shortall said she simply “does not believe” the much-vaunted capacity of 100,000 tests exists, given it has never been reached; last week’s total of 62,000 was the highest yet.

And although the HSE maintains it can turn around tests and contact tracing in an average of 2.2 days at present, many doubt that level of performance. The limited amount of information released does not allow for any deeper analysis or checking of the figures.

The passenger locator form incoming travellers are supposed to fill in has just gone online, but Shortall accurately summarised the previous paper-based system as “little more than forms being handed out, and the follow-up has been hopeless”.

Ireland’s response to Covid-19 was forged, understandably, in a time of crisis. Six months on, we still have a patchwork of regulations, guidance notes and laws that are often mutually inconsistent or lack a clear evidence-based rationale. This was clear during the controversy over Phil Hogan’s involvement in the Oireachtas Golf Society dinner, and the inconsistencies also featured in the kickback in Kildare over local restrictions imposed on the county.

The National Public Health Emergency Team (NPHET) has been clear in fulfilling its public health remit but, above them, the co-ordination of actions has been haphazard, particularly since the change of government.

This matters, because the actions needed to stem the outbreak impinge on so many areas of life, and involve multiple Government departments and agencies. It is hard to think of a single decision on Covid-19 that the Government has made so far that wasn’t just a rubber-stamping of NPHET’s recommendations.

There has also been a dearth of real-time information to allow the public make informed decisions based on where the virus is circulating now.

The HSE stopped publishing geographical information on the location of cases early in the pandemic and, until this week, county-by-county 14-day incidence figures were not published.

“We need to collect relevant data and interrogate it so that it informs us on how to live with the virus,” says infectious disease specialist Prof Mary Horgan, who is president of the Royal College of Physicians of Ireland.

Knowing more about the relative risk faced by specific categories in the population would help guide the measures to be applied to them, for example.

Shortall points out: “Actions being taken at the moment are simply not understandable because they are not backed up by any data or evidence.”

The pity is that success is attainable. Other European countries are successfully reversing their second surges, while in Ireland the virus is spreading but slowly. We now know a huge amount about how the virus spreads, who it affects most and what stops transmission, Horgan points out.

“If countries are serious about opening up, they must be serious about suppressing transmission and saving lives,” World Health Organisation boss Dr Tedros Adhanom Ghebreyesus said this week.

But this can only be achieved if countries are in control of transmission: “The more control countries have over the virus, the more they can open up. Opening up without having control is a recipe for disaster. It’s not one size fits all. It’s not all or nothing.”

The WHO has a checklist of actions to achieve this goal. The first is to prevent “amplifying events” such as in stadiums or nightclubs. This is why Ireland has banned spectators and kept pubs not serving food closed.

Scotland has closed pubs in Aberdeen but kept them open when it imposed restrictions in Glasgow, because the virus was circulating in different ways in the two cities.

Another goal has been reducing death among vulnerable groups. As elsewhere, the failure to protect older people in nursing homes was the greatest single failing in Ireland’s performance at the height of the pandemic. The refusal of the authorities to allow for a proper investigation of what went wrong is worrying, but it is hard to imagine the system allowing the same mistakes to be made a second time.

Irish people generally are successfully implementing the third leg of the WHO strategy by taking personal measures to reduce risk – physical distancing, masks, handwashing and respiratory etiquette, and avoiding the three Cs of closed spaces, crowded places and close-contact settings.

Tailored actions to find, isolate, test and care for cases, and to trace and quarantine contacts, is the last item on the WHO list of actions. This becomes more difficult to implement as the level of public co-operation declines. This week we learned that up to one-quarter of test appointments are “no-shows” while half of close contacts fail to turn up for their test after seven days.

The Government, which plans to unveil its new strategy in mid-September, appears to be following the example of other countries by offering testing to travellers so as to shorten quarantine periods.

In Luxembourg and Iceland, for example, the 14-day quarantine period can be cut if visitors test negative on arrival and five days later. Luxembourg even offers free tests to outgoing and incoming residents arriving in its airport.

The febrile debate around Covid in Ireland is absent in much of Europe, except perhaps around the issue of mask-wearing. The anger directed at members of the Oireachtas golf society was understandable, but hardly productive.

Equally unproductive is the tendency of so many to crank up the language used to warn people of the dangers of the virus. Minister for Health Stephen Donnelly had little justification for claiming late last month that the coronavirus pandemic is “close to having us lock down the country again”.

Acting chief medical officer Dr Ronan Glynn again this week urged us to treat all our friends and contacts as “pariahs” in order to minimise the risk of infection from them. Meanwhile, Fianna Fáil TD Marc MacSharry likened new regulations requiring pubs and restaurants to keep records of meals bought by customers for a month to the actions of the “Stasi”.

The hyped-up language might not be necessary if the public had a clearer idea of what was happening – where the virus is circulating, what actions are being taken to deal with outbreaks – and if a better co-ordinated and better explained response was in place.

Four people with Covid-19 died in August, compared to 15 on the roads. The only death announced last week actually occurred in June.

“We need to be getting on with it, by making informed policy decisions on what we now know about the disease,” says Horgan. “We need to look at what’s happening in Europe and see what’s working for them.

“And we need to move from a state of fear to being cautious.”