0ver 65s at risk when mixing alcohol and medications - study 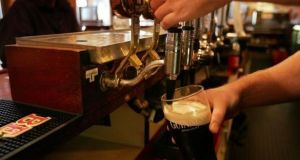 The study revealed that 67 per cent of over 65s drank alcohol with 27 per cent identified as heavy drinkers. File image: The Irish Times

One in four people over 65 years are vulnerable to potentially serious health issues as a result of the combined use of alcohol and medications.

A new study by researchers at the Royal College of Surgeons of Ireland (RCSI) has warned about the dangers for older people of mixing alcohol and medicine as it can lead to falls and other accidents, gastrointestinal bleeds and liver damage.

One of the report’s main authors, Alice Holton, an RCSI pharmacist and lecturer, said the findings added to the growing body of evidence which suggested an increased risk of cardiovascular problems and health issues associated with the central nervous system as a result of taking both alcohol and medication.

The study pointed out that ageing lowers alcohol tolerance and prolongs the time that alcohol circulates in the body.

At the same time, it noted that the use of multiple medications also increases with age which meant older people who also consume alcohol on a regular basis are particularly vulnerable.

In particular, it said the interaction between alcohol and medication can manifest itself in the form of increased sedation, leading to falls and other accidents as well as issues with blood sugar and blood pressure levels.

The study by researchers at the RCSI’s School of Pharmacy and Biomolecular Sciences is published in the latest edition of the medical journal, BMJ Open.

Almost 1,600 older adults living at home recruited through 120 community pharmacies were interviewed as part of the research.

The study revealed that 67 per cent drank alcohol with 27 per cent identified as heavy drinkers.

Dr Holton said the study found that 28 per cent of all older people were identified as being at risk of potential harm from combining alcohol with medication. The figure translates as 42 per cent of those who drink being at risk.

“Our findings also suggest that older adults are at greatest risk of potentially serious alcohol-medication interactions due to their concurrent use of alcohol with cardiovascular agents and with medications which act on the central nervous system,” said Dr Holton.

The study said 10 per cent of participants were at risk of one potentially serious alcohol-medication interaction with 18 per cent at risk of two or more.