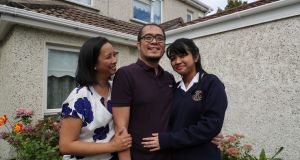 Jerick Martin with his wife Melissa Rose and daughter Camilla Rose: “When I saw my daughter, I knew I needed to recover for her.” Photograph: Nick Bradshaw

A 38-year-old healthcare worker who spent 68 days in intensive care with coronavirus, mostly in an induced coma and on a ventilator, has warned young people they cannot take the virus lightly.

Jerick Martin, who contracted Covid-19 while working as a carer in a north Co Dublin nursing home, says his wife was called by medics on two occasions and told he might not survive the disease as he battled multi-organ failure due to Covid-19.

The Filipino man, who has been living in Ireland for 14 years, lost 22 kilos, or 3½ stone, during the two months he spent in Beaumont Hospital in Dublin from April to June.

“When I got out of the hospital, I looked like a zombie – I was skin and bones,” he said.

More than two months after leaving hospital, Jerick now has diabetes, high blood pressure and shortness of breath when he walks up stairs as a result of his Covid-19 infection.

Previously a fit and healthy thirtysomething, he says younger people need be careful.

“They need to take this seriously. I am only 38. I didn’t think what happened to me would happen. I didn’t have diabetes or hypertension before. I now need to take puffs from a ventolin inhaler. I am breathless if I go up and down the stairs. I feel nauseous sometimes,” he said.

It is almost five months since Jerick contracted the virus.

On Wednesday, April 15th, he began experiencing a wheeze two days after working a weekend shift at the nursing home. He called in sick that day.

The Finglas-based man called his GP and was tested for Covid-19 at the Croke Park testing centre in Dublin. By the time his test result came back positive the following Sunday, he was experiencing fever and shortness of breath. He was transferred to hospital the following day.

Struggling to breathe, Jerick was intubated and put on a ventilator on April 23rd. He remained ventilated and in a coma until May 20th. His wife, Melissa Rose, says the nurses made a video call to his home showing him nodding and giving a thumbs-up sign to the camera.

“We were all crying. We were so happy that he was awake. I called his family. We could see that he was following commands. A very heavy weight was lifted out of our hearts,” she said.

Jerick was allowed to see his wife and 12-year-old daughter again because they had contracted Covid-19 from him and had made a full recovery. His condition deteriorated further, however, and he was put in an induced coma again to help his body fight the infection.

“We got a call from the hospital at one in the morning. Me and my daughter were still awake. It was her birthday. I said, ‘Maybe it is your dad and he wants to say happy birthday’,” said Melissa.

Jerick’s wife was told to come to the hospital immediately to see him.

“It was shocking. My daughter felt that she was bad luck because it was her birthday and this happened to him. She felt really bad,” said Melissa.

She was shocked to see her husband in a prone position surrounded by tubes in the ICU.

“It was really heartbreaking to see him like that and for a young fellow to be going through so much trouble,” she said.

Melissa describes her husband’s two months in hospital as “like living hell for us”.

“I didn’t know when this was going to end. Every day was a ticking time bomb,” she said.

Jerick Martin said that, looking back, being able to see his wife and daughter during his time in his hospital gave him a “big boost” and helped his recovery.

“When I saw my daughter, I knew I needed to recover for her because she is only young,” he said.

Now, with his recovery from Covid-19, he feels like he has been given a second chance.

“Before I did not pray every day. Now, every day I get up in the morning, I pray to thank God for giving me a second life, to be able to see my daughter grow up,” he said.

“If you get this, it is very hard. For others, it is like mild symptoms. We cannot take this lightly. It has changed our lives.”

Vicky Phelan considers move to US for experimental drug trial