Coronavirus in Ireland: 98 more cases and no further deaths reported

Sligo, Mayo and Leitrim currently have the lowest levels of Covid-19 infections in the State 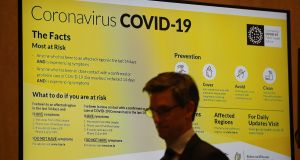 A further 98 confirmed Covid-19 cases have been reported in the State, and no further deaths, the National Public Health Emergency Team (NPHET) has said.

There has not been a death recorded from Covid-19 in the State since August 22nd.

Of the cases notified two thirds are aged under 45 and nine cases have been identified as community transmission.

More cases of the virus were found in women than men, with 50 of Friday’s cases being confirmed in females, while 48 cases were men.

There were 24 cases in Dublin, 13 in Kildare, eight in Kerry, six in Kilkenny, six in Limerick, six in Louth, five in Tipperary and the remaining 30 cases are in Carlow, Clare, Cork, Galway, Laois, Leitrim, Longford, Meath, Monaghan, Offaly, Waterford and Wexford.

Acting chief medical officer Dr Ronan Glynn called on members of the public to keep physical distance “top of mind at all times” ahead of the weekend.

“Have no more than six visitors to your home and keep 2m between you. Open windows and keep rooms well ventilated if possible,” he said.

“It’s important that we all keep our number of social contacts low while we focus on keeping our schools safe, continuing to resume healthcare services and ultimately protecting the most vulnerable from Covid-19.”

According to the Department of Health’s Covid-19 dashboard, there were 44 cases of the virus in hospitals on Friday, seven of which were in the intensive care unit.

Some 14,064 tests were carried out in the past 24 hours, and the positivity rate was 1.3 per cent, the dashboard states. It brings the total number of tests carried out this week to 63,697.

Sligo, Mayo and Leitrim currently have the lowest levels of Covid-19 infections in the State, according to new data.

Each recorded fewer than five new cases of the virus over the past fortnight, giving incidences of 1.5, 2.3 and 3.1 cases per 100,000 population, respectively.

In contrast, Kildare continues to have the highest incidence , at 73.7, followed by Tipperary, at 63.3, according to a report from the Health Protection Surveillance Centre (HPSC).

The HPSC has for the first time begun publishing daily epidemiological reports based on 14-day incidence, which stands at 32.3 nationally.

A total of 1,536 cases were notified in the past fortnight, 49 patients were hospitalised and two were admitted to intensive care. Almost half of the new cases were linked to clusters and 140 were healthcare workers. The mean age of cases was 35 and ages ranged from 0 to 98 years.

The report shows 182 cases occurred among children aged 14 and under. Two children in this age range, and six in the 15-24 year-old bracket, were hospitalised.

In the capital, the highest incidence of the virus is in Dublin West, followed by Dublin North-Central. One in five cases involved community transmission, and 7 per cent were travel-related.

A separate report on clusters says workplace outbreaks have occurred in a variety of facilities, including food wholesalers, pizza delivery premises, factories, primary care centres and Garda stations. A total of 546 oubreaks remain open, including 377 in private homes, 38 in nursing homes and 35 in workplaces.

Northern Ireland reported one more coronavirus-related death on Friday, bringing the total number of fatalities recorded by the North’s department of health (DoH) to 564. Two deaths were recorded on Thursday. It reported 61 new cases.