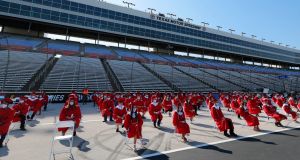 Donald Trump has doubled down on his calls for the US to accelerate the reopening of its economy, as he suggested that next month’s G7 summit could take place in person.

The annual meeting of world leaders had been scheduled to take place in Camp David, after the US president abandoned plans to host the summit at his Mar-a-Lago golf and hotel complex in Miami, Florida. But in mid-March the White House announced the event would take place by way of video conference “in order for each country to focus all of its resources on responding to the health and economic challenges of Covid-19”.

In a tweet on Wednesday, however, Mr Trump said he was considering rescheduling an in-person meeting as a sign of “normalisation”.

“Now that our Country is ‘Transitioning back to Greatness’, I am considering rescheduling the G-7, on the same or similar date, in Washington, D.C., at the legendary Camp David,” he wrote. “The other members are also beginning their COMEBACK. It would be a great sign to all – normalization!”

It is unclear if the other participants will agree to an in-person meeting for the summit, which is scheduled to begin on June 10th. The United States holds the rotating presidency of the group, which includes the leaders of Canada, Japan, Britain, Germany, France, Italy as well as the European Union. The group was previously known as the G8 before Russia’s membership was suspended in 2014 following its annexation of Crimea.

Mr Trump’s announcement followed a conference call between US treasury secretary Steve Mnuchin and finance ministers of the G7 during which ministers discussed the steps being taken in each economy to lift restrictions in the face of the coronavirus pandemic, which has killed more than 300,000 people globally.

Mr Trump, who was meeting the governors of Arkansas and Kansas in the White House on Wednesday, has been urging states to lift restrictions that were introduced as a response to the pandemic.

More than 90,000 Americans have now lost their lives from the virus and the United States has recorded more than 1.5 million cases.

But the Mr Trump has said that the high number of cases is a “badge of honour” as it indicates a high rate of testing. “I look at that as, in a certain respect, as being a good thing because it means our testing is much better,” he said this week.

He also continued to blame China for the pandemic on Wednesday, tweeting: “Some wacko in China just released a statement blaming everybody other than China for the Virus which has now killed hundreds of thousands of people. Please explain to this dope that it was the ‘incompetence of China’, and nothing else, that did this mass Worldwide killing!”

Relations between China and the United States have deteriorated sharply since the onset of the coronavirus crisis, raising speculation that the US president could move to sanction Beijing in some way. The two global powers were already in trade negotiations before the outbreak of the virus hit.

Virtually all states in America have now begun to ease social distancing rules and reopen businesses in some cases.

Texas – one of the first states to reopen – lifted more restrictions this week, allowing restaurants to increase in-dining capacity to 50 per cent, and permitting bars to open from Friday with 25 per cent capacity. The easing of restrictions comes despite the highest number of one-day cases in the state at the weekend, with 1,800 new cases reported on Sunday.

Governor Greg Abbott linked the rise in cases to increased testing. “As Texas continues ramping up its testing capabilities, there will be an increase in positive cases as the state targets the most high-risk areas: nursing homes, meat packing plants and jails,” he said in a statement.