More men than women say they will get the vaccine in Red C poll of 1,001 Irish adults 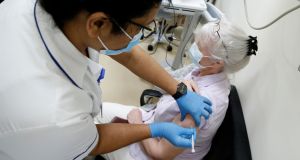 A woman receives a dose of the Pfizer-BioNTech Covid-19 vaccine in Dubai. Photograph: Ali Haider/EPA

Some 71 per cent of Irish people say they will get the Covid-19 vaccine, according to a new survey.

The research, which had a random representative sample of 1,001 Irish adults and was conducted by Red C, found that slightly more men said they would get the jab than women, at 76 per cent and 66 per cent respectively.

People in the vulnerable “over-55s” category (81 per cent), as well as those in higher social grades (77 per cent) are most likely to say they will get the vaccine, the researchers found.

Ireland is behind the United Kingdom at 81 per cent, but ahead of European countries like Germany (65 per cent) and France (44 per cent).

The research was conducted as a part of the wider WIN Worldwide Survey, which examined the attitudes and worries of 26,763 people globally regarding the coronavirus pandemic.

The fieldwork for the survey was conducted between October and December, and the margin of error is 2.4-4.4, with a 95 per cent confidence level.

The global average was computed according to the share of the covered adult population of the surveyed countries.

On the performance of government during the Covid-19 crisis, more than six in 10 Irish people felt it performed well in handling the crisis, compared with only 35 per cent of those surveyed in the UK.

Compared with the other 31 countries surveyed, Irish people were on average happier with the government response to the pandemic.

Those in older (55+) age groups and higher social grades were particularly happy with government actions, while groups disproportionately affected by the crisis (18-34s and lower social grades) were more critical of government.

Meanwhile, just under half of Irish adults, or 46 per cent, rated the capacity of the Irish health system positively.

One in five Irish people rated it “very badly”, with 18- to 34-year-olds being the most critical, the survey found.

Irish people have been less satisfied with the capacity of the health service to cope with the crisis than in most other countries surveyed, including Germany, in which 81 per cent of people viewed the service positively.

Despite the encouraging news of vaccines on the horizon, Irish people’s confidence in international travel has not yet returned.

Only 38 per cent of Irish people said they were likely to take a foreign holiday next year, though this is above the global average of 29 per cent.

The Irish response is on par with the survey results from the UK, in which 37 per cent said they were likely to travel abroad next year, and Germany at 39 per cent.

“The willingness to get vaccinated is an evidence of the strong desire of getting back to normal, considering that citizens in many countries lack confidence in their health system,” she said.

“Based on these results, it will be interesting to see how the predisposition to get vaccinated and travel will change in the first months of the 2021.”