All is calm in Christmas sales, as retailers say rules lack clarity

‘We don’t know what we’re allowed to do,’ says one Next manager in quiet city centre 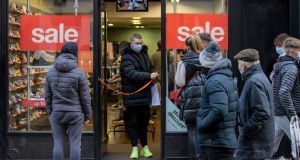 The streets of Dublin, normally filled with shoppers seeking bargains in the post-Christmas sales, were quiet across the weekend as a result of public health restrictions.

While non-essential retail is permitted to reopen under the Government’s revised Covid-19 measures, the sector has been requested to defer any large sales they had planned in order to reduce the number of people queuing and congregating.

It seems most retailers have followed that request, with a noticeable decrease in signage on shopfronts declaring sales.

Vincent Brady, shop manager at Next on Henry Street, says it is difficult for retailers to know what to do. The shop has no sale signs and has instead marked on the tags in black pen if any of the items can be purchased for a reduced price.

The retailer normally has one of the biggest sales of the post-Christmas period, with queues gathering outside their shops nationwide just before they reopen.

“We obviously don’t have a sale on [in store this year],” he says. “There is sale stock kicking about but we haven’t marked it down at all yet ... There’s not a lot of sale on the floor. We don’t know what we’re allowed to do.”

“It’s very unclear. Some customers came in and they thought we just weren’t allowed to advertise the sale on the windows, but allowed to have the sale in the store but we didn’t think that was right. We were told to postpone the sale. That’s what Next has done.”

He adds: “The guidelines just said retailers were being asked to postpone, but what does that mean? Does that mean it’s a legal thing or just a suggestion?”

Just down the road in Arnotts, three staff members in the beauty hall cannot believe how quiet it is, particularly in light of the pre-Christmas rush. At the Liffey Street entrance of the store, the real-time counter says there are just over 600 customers across the four floors before lunchtime on Sunday.

“I knew it would be quiet, but I hadn’t expected it to be like this,” one staff member tells her colleagues. “It feels like we’ve more staff than customers.”

Her other colleague nods her head in agreement. “You should have seen it yesterday morning. It was even worse.”

In both Arnotts and its sister store Brown Thomas, there are signs on the doors saying: “While our winter sale is now online only, our store is still open with current seasonal offers continuing.”

The stands throughout the shops have small red signs over certain products, alerting customers to price reductions.

Shopper Thomas Morrim, leaving Brown Thomas with some seasonal offers, says he always goes shopping in the days after Christmas, but this year is very different.

“It is so quiet. We were in Stephen’s Green shopping centre this morning and it was practically empty. It’s much nicer. It’s been a productive and enjoyable day while we’re browsing.”

Despite the ban on sales, Morrim says many shops in the city have good offers.

“We’re finding there are plenty of sales. Places are saying the offers are online only but when you go inside, they’re available.”

While Dublin city is quiet, some shopping centres in the suburbs have been busier, including Pavilions Shopping Centre in Swords, where there are queues outside most shops, particularly those selling sportswear.

The manager of one clothing retailer says that although money is coming in slower, she is surprised by how many people are out shopping considering Level 5 restrictions are in place.

“It’s okay now, but a few minutes ago there was a queue half way up the centre. We don’t have a sale on at all – it was scrapped. We only have the few seasonal discounts, but we have them all-year round. I think it’s that people got some money for Christmas and [they] just want to use it.”

Standing in the queue outside Zara, Joanne, who does not want to give her surname, says she has gone shopping on a whim.

“I just decided to get out of the house but there are a lot more sales than I expected. I thought I wouldn’t get anything at a reduced price but there are still some good deals.”

“I got some vouchers and there are some things I’ve been looking for, so I just said, why not?”