Inquest may feed into debate on future of coroner service 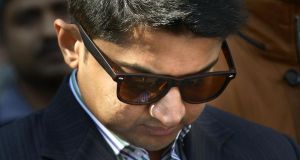 Praveen Halappanavar after the jury delivered a verdict of death by misadventure at the inquest into the death of his wife Savita. Photograph: Brenda Fitzsimons/The Irish Times

Inquest juries have about a dozen possible verdicts available to them, from unlawful killing to accidental death, but given the circumstances in which Savita Halappanavar died, the choices facing the jurors at Galway Coroner’s Court yesterday were far narrower.

Before they retired to consider their verdict, the coroner, Dr Ciarean
MacLoughlin, told the six men and five women of the jury they had two to choose from: a narrative verdict or medical misadventure.

The former is a straightforward recording of the facts of a case; the latter a more specific conclusion on the circumstances in which someone died.

Put simply, a death is categorised as medical misadventure where there is an unintended outcome of an action. The verdict does not suggest blame or wrongdoing, and is often used, for example, where complications arise from a medical procedure or the administration of drugs.

All inquests have a limited remit – their purpose is to establish the “who, when, where and how” of any death that is unexpected, unnatural, violent or unexplained. They do not decide whose fault it was or whether there was a criminal offence.

What they can do, however, is issue general recommendations designed to prevent similar deaths. The Galway jury made full use of this power by making nine recommendations, or “riders” as they are known. It recommended, among other things, that blood samples be followed up to ensure errors do not occur; that proper sepsis management training and guidelines be available for hospital staff; and that modified early warning score charts be introduced in all hospitals as soon as possible.

Specialists have been debating for years what the precise function of an inquest should be. If its task is merely to establish the proximate cause of death, as some would argue, then the role of the coroner is confined to admitting the pathologist’s postmortem report at the inquest. Anecdotal evidence suggests some coroners work broadly along these lines.


Others believe an inquest serves a wider social function. A report by the Coroners Review Group in 2000 argued that the narrow view of an inquest as rubber-stamp for the pathologist’s report did not “take into sufficient account the core reason for having a coroner system in the first place”.

In other words, the “how” should mean not only the medical cause of death, but also the surrounding circumstances of death.

Dr MacLoughlin has won widespread praise for his handling of the Halappanavar inquest, sticking closely to the remit laid down for an inquest while allowing for the teasing out of the circumstances of Savita’s death.

A well-run inquest, as the past fortnight has shown, can serve a greater purpose than merely registering a death. It can help society to learn lessons. And it can give the bereaved an opportunity to learn more about a loved one’s final hours, ask questions of experts and witnesses – and, hopefully, find some peace of mind.