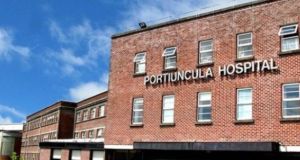 Lorraine Reilly: “If we were told the truth, then there is no way we would have gone back to Portinuncula.”

Families, including a couple who lost two children at birth, have criticised Portiuncula Hospital, Ballinasloe, for attempting to cover up the poor care their newborns received.

A long awaited report into maternity services at the hospital is due to be signed off in the coming days.

The 18 reviews into problem births at the hospital include the cases of Warren and Lorraine Reilly’s two daughters, Asha and Amber, who died in the hospital in 2008 and 2010.

Ms Reilly said she was 30 weeks pregnant with her second child when, in 2008, she began to experience pain and went to Portiuncula. After waiting an hour for a room, she began bleeding and her daughter, Asha, was delivered stillborn. Ms Reilly had suffered a massive placental abruption.

When the couple returned to the hospital for a check-up six weeks after the birth, their consultant said Portiuncula would “take good care of you” and that nothing would be kept to chance if they decided to have another baby.

Two years later, Ms Reilly returned to the hospital at full-term, ready to give birth to her daughter Amber. The baby was delivered by C-section on the recommendation of the consultant but the couple was later informed their daughter had been without oxygen for an unknown amount of time.

Amber was transferred to the National Maternity Hospital in Dublin and died six days later.

“If we had known exactly what had happened after Asha, if we were told the truth, then there is no way we would have gone back there to have Amber... we are just so angry over that,” Ms Reilly told RTÉ Investigates on Monday.

The couple only discovered a review had taken place into Amber’s death in 2011 – four years later, following media reports in 2015 of an investigation into care deficiencies at the hospital.

“To think that they’d carry out any review without consulting the family that had actually gone through the loss and only to have it made available to us at that stage it was extremely frustrating,” Mr Reilly said, adding that a number of the recommendations which arose from the review have not yet been implemented.

“For us we feel that they definitely didn’t act on those recommendations. Well definitely after hearing what was after happening in 2014 to the other families and that’s absolutely heartbreaking.”

A review into Asha’s death found “a failure to recognise the signs of placental abruption and a failure to intervene to deliver the baby”.

The review into Amber’s death concluded that there was a failure to identify and respond to abnormal CTG tracings and a failure to follow the guidelines in place for the management of a vaginal birth after caesarean.

A statement from the HSE Saolta Health Care Group, which includes Portiuncula, said they had written to the Reilly family “...to apologise unreservedly and fully for the failures of care delivered to Lorraine that contributed to the likely preventable deaths of Asha and Amber”.

Earlier this year the couple commissioned an independent medical expert to review Ms Reilly’s medical files as well as those of Asha and Amber. The expert concluded “the grossly substandard management” of Lorraine’s condition “ was responsible for the intrauterine death of Asha.”

The expert also found that had Amber been delivered earlier she would have been “spare a considerable period of hypoxia” or lack of oxygen.

The couple also applied for all documentation on the births from Portiuncula under data protection legislation. They were sent a series of emails discussing the 2011 review which included a message from a staff member attempting to hide the coroner’s directive to carry out a review into Amber’s death from the family.

Following the review, a doctor wrote in an email: “I don’t see any place in the correspondence with [the coroner] where a copy of this is required to be given to the parents of the deceased baby...”. Despite a recommendation from the State Claims Agency that the doctor not take part in the incident review, the medical professional was involved.

“It was blatantly obvious that they were trying to cover their tracks,” Ms Reilly said.

Another couple featured in the RTÉ Investigates programme also criticised the hospital for the care provided at the birth of their two sons, both of whom nearly lost their lives.

Eimear Grennan and Colman Condron told the programme they were unhappy with the reviews into five-year-old Cole and two-year-old Finian’s births in 2012 and 2014. The Saolta reviews did not identify any root causes of the problems at birth and said the boys’ sudden deterioration was unpredictable and unpreventable. Both boys went on to make a full recovery.