Peter Boylan texts: ‘I’m sorry it’s come to this but I did try to warn you’ 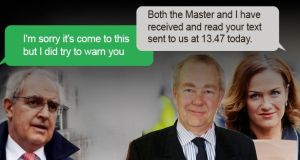 The former master of the National Maternity Hospital Dr Peter Boylan said he is not going to resign from the hospital’s board despite a request to stand down.

Dr Boylan last week expressed strong reservations about the agreement reached last November between St Vincent’s and the NMH under which the maternity hospital is due to move to the St Vincent’s site as part of a €300 million project under the sole ownership of the Sisters of Charity.

Dr Boylan had initiated the exchange with a text message to both Mr Kearns and current master, Dr Rhona Mahony, who is Dr Boylan’s sister-in-law, in which he urged them to “sit down and talk”.

Here are the texts: