Hotels used for such purposes would in effect be like detention centres, says Tánaiste 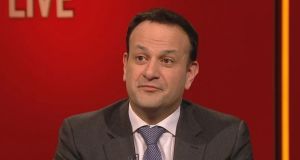 Speaking on the Claire Byrne Live show on RTÉ One television, Leo Varadkar said it was likely a policy of introducing mandatory hotel confinement would not be fully effective if the Republic implemented it on its own because of the Border with Northern Ireland.

The Government is not ruling out introducing mandatory hotel confinement for arrivals into the country as part of the fight against Covid-19, Tánaiste and Minister for Enterprise Leo Varadkar has said.

The Tánaiste said he has been talking to his counterpart in New Zealand, and while people might be kept in hotels for such purposes, they would in effect be like detention centres.

Speaking on the Claire Byrne Live show on RTÉ television, he said it was likely the policy would not be fully effective if the Republic implemented it on its own because of the Border with Northern Ireland.

If such a measure was introduced it would be likely to last for most of the year, as such dramatic public health measures were hard to reverse.

It might create even greater restrictions on foreign travel and could mean that people would not be able to travel for reasons such as job interviews, education, or to attend family funerals. It might also affect supply chains.

He said he had spoken to the chief medical officer, Dr Tony Holohan, and Dr Philip Nolan, of the National Public Health Emergency Team (Nphet), and they advised that pursuing a zero Covid strategy “probably wouldn’t work”.

This was because of Ireland’s position in the middle of a European outbreak of the disease, the Border with Northern Ireland, and our connectivity with Britain and Europe.

Zero Covid means no new cases for 14 days. It took the city of Melbourne, Australia three months to get from about 400 Covid cases to zero.

“For us it could take much longer. It might mean permanent lockdown, and we might never get to zero.”

A poll conducted by the programme found that 71 per cent of respondents favoured closing the Border with Northern Ireland. Mr Varadkar said he was surprised by how high the figure was.

“I would be against that,” he said, regarding fully closing the Border. “We are not one state on this island, but we are one country.”

One hundred years after partition, “I wouldn’t like us to be the ones to do that.”

He would like to see an all-Ireland approach to the disease, but that was not possible because of the politics between Sinn Féin and the DUP.

A two-island approach with the UK would take out the problem of Northern Ireland for both jurisdictions.

The Government’s plan was to suppress the virus to very low levels by early March, and use the time to get as many people vaccinated as possible, he said.

The easing of restrictions will have to be very, very slow this time, more like with the first wave of the disease last year, Mr Varadkar added.