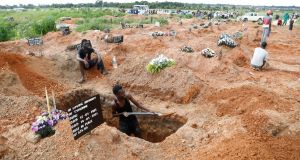 Zimbabwe’s ailing healthcare system could be overwhelmed within “weeks” in the absence of urgent support to deal with a rising tide of coronavirus infections, the Irish aid agency Goal has warned.

The southern African country has witnessed a surge in Covid-19 cases since the turn of the new year that has engulfed its already overstretched hospitals and clinics, according to Gabriella Prandini, Goal’s country director in Zimbabwe.

Four government ministers in Zimbabwe have died of the virus – three of them since the start of the year.

“We are increasingly concerned about the current spike in Covid-19 cases in Zimbabwe,” Ms Prandini told The Irish Times. “Fifty-six per cent of the country’s cumulative cases and 58 per cent of the cumulative deaths from the virus have been recorded in the first three weeks of January.”

According to ministry of health data, Zimbabwe has recorded 31,320 cases of the virus and 1,005 related deaths since the disease was first detected in the country last March. Its official update on Sunday stated that 313 new infections and 31 deaths were reported in the previous 24 hours.

Goal is heavily involved in efforts to contain the spread of the virus in Zimbabwe, particularly in Manicaland, a province with the third highest number of infections.

Ms Prandini said many hospitals and clinics had a limited supply of equipment such as oxygen, ventilators and personal protective equipment (PPE) for health staff to use.

“There is a real possibility that health facilities could become overwhelmed in the coming weeks,” she said.

Medical facilities nationwide appear to be under such significant pressure that health professionals have gone on strike to draw attention to their plight.

In the second week of January, 1,300 nurses at Sally Mugabe Central Hospital, a public medical facility in the capital Harare, were joined by hundreds of colleagues from around the country in downing tools over a lack of PPE.

In addition, the Zimbabwe Association of Doctors for Human Rights warned in recent weeks of a coming catastrophe, saying public hospitals were under severe strain due to bed and equipment shortages.

On January 5th, the government reintroduced a 30-day hard lockdown in a bid to slow the spread of the virus. Among its restrictions are a night-time curfew and a ban on all gatherings except funerals, which now have a limit of 30 mourners.

The deaths from the virus of Zimbabwe’s foreign minister Sibusiso Moyo and transport minister Joel Matiza were both announced last week, bringing to four the number of cabinet members there who have died of the disease.

Mr Moyo, a former army general and close ally of President Emmerson Mnangagwa, gained international prominence in 2017 when he announced on television that the military had toppled former president Robert Mugabe in what was subsequently described by analysts as a soft coup.

Speaking at a funeral for another government colleague – Ellen Gwaradzimba, who was not a member of the cabinet – last Thursday, Mr Mnangagwa urged Zimbabweans to stay indoors and utilise recognised safety measures including social distancing.

“This is not a time to be tired and to let our guard down in hopelessness,” he told mourners at the funeral in Harare, adding: “Those who are not on essential duties, stay at home”.

Despite the gravity of the crisis, Mr Mnangagwa’s regime has yet to officially seek additional support for its health services.

Zimbabwe’s surge in coronavirus infections has been blamed by the authorities on people travelling home from neighbouring South Africa during the festive season.

South Africa, which has by far the highest number of coronavirus cases and deaths in Africa, has been hit by a massive spike in new infections since mid-December.

The more devastating second wave has been attributed to the emergence of a new faster-spreading variant of the virus that was first detected in South Africa late last year.