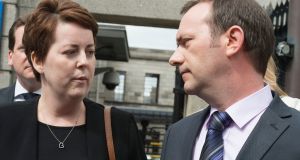 Ruth Morrissey and her husband Paul outside the Four Courts on Friday at the conclusion of her case. Photograph: Dave Meehan/The Irish Times

Terminally ill Ruth Morrissey, who on Friday won a High Court action over the testing of her cervical smear slides, has criticised the Taoiseach because she had not expected to have to take her case to court.

Speaking after Mr Justice Kevin Cross awarded her and her husband Paul €2.16 million against two US laboratories and HSE, Ms Morrissey told reporters she had not expected to find herself in this position “because An Taoiseach told us that none of us would have to go through this but unfortunately I’m the one who had to.”

Ms Morrissey is suffering from cervical cancer and has been told she “approximately two years” left to live.

Ms Morrissey, whose claim for damages was contested, was referring to statements made when the cervical cancer controversy first emerged last year that claims by affected women might not be contested.

Ms Morrissey said she hoped the decision in her case might mean that the “women who are left” won’t have to go through a court process and “fight for their right to have a good life in what they have left.”

Walking with the aid of one crutch and with her voice at times quivering with emotion, Ms Morrissey gave a brief comments to reporters outside the Four Courts standing beside her husband Paul.

She encouraged women to continue going for smear tests “even though it failed me, but it does save many, many lives.” She also encouraged people to get the HPV vaccine, which protects against human papillomavirus, which can cause cervical cancer.

Speaking after the court verdict Taoiseach Leo Varadkar said setting up a tribunal for women affected by the cervical cancer scandal was a priority for Government and he hoped it will start by mid-July.

Mr Varadkar said he was glad the case was concluded and she had been vindicated.

Asked about his pledge in 2018 to find a way where women did not have to pursue their cases in court, he said: “A year ago I said I did not want any woman to go through court and I still don’t.

“At the time I though it possible to settle all cases through mediation and we know that is not possible,” he said.

Mr Varadkar said a judge has been appointed to the tribunal and the legislation was being prepared.

He said the tribunal would hear its cases in private, which was unusual for a tribunal, and would also have access to independent expertise.