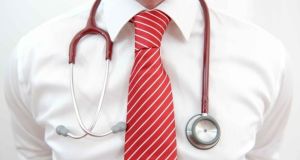 The Government needs to invest more than €5 billion in additional beds, equipment and infrastructure as there is now clear evidence acute hospitals are “beginning to fail”, senior doctors have warned.

In a submission to the Department of Health, the Irish Hospital Consultants Association (IHCA) said the system was experiencing ever-increasing waiting lists for essential surgery while there had been a “collapse” in the elective or non-urgent output in acute hospitals.

It warned key targets in relation to cancer care were also now being missed.

The submission, sent last Friday, said the waiting time prior to the commencement of chemotherapy – after a consultant decides this is required – was now five to six weeks in some hospitals as a result of staff shortages on oncology day wards. It said this was up to three times longer than official guidelines stipulated.

In other examples of dysfunction, the association said there was a nine-year waiting list in Waterford for an outpatient appointment to see a consultant urologist.

It said staff shortages at Beaumont Hospital in Dublin had resulted in “protracted theatre closures”, with one in four theatre lists cancelled on an ongoing basis.

It says in Cork University Maternity Hospital more than 100 surgeries had been cancelled this year due to low staffing levels.

In University Hospital Waterford “a large number of older catheterised male patients are languishing on waiting lists with no realistic prospect of being operated on in the short or medium term”, it said.

The association called on the Government to provide an additional 4,000 beds, which it estimated would cost €4 billion. It also said an additional 500 rehabilitation beds were required at a cost of €500 million as well as 290 extra intensive care beds which would cost €360 million. It also called for funding to replace ageing and obsolete equipment.

The submission emerged after it was revealed that the Department of Health had warned the Government in a separate submission that it required a further €2 billion in capital funding to deliver key projects such as the new National Maternity Hospital.

Government sources on Sunday insisted the planned hospital would be built. They said a process in relation to new capital funding was being undertaken at present within Government.

Fianna Fáil said the suggestion that the department did not have the resources needed to complete a number of key infrastructure projects “is proof positive that this Government cares more about announcements than delivery”.