Analysis: Difficult not to think of the 12 families affected by unnecessary deaths 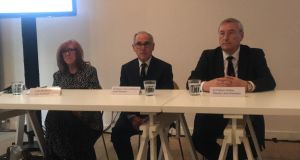 Dr Henry Kitchener (centre), lead assessor in the Royal College of Obstetricians and Gynaecologists review of the CervicalCheck screening programme, with assistant assessors at the launch in Dublin of their report. Photograph: Aoife Moore /PA Wire

The independent review of tests carried out under the CervicalCheck programme was first mooted in May 2018 in the hope it would help draw a line under the controversy that had just erupted in relation to the cervical cancer screening programme.

The idea was that overseas experts would run the rule over the work of the Irish screening programme and tell us whether it was up to scratch. While not determining whether negligence was involved in the reading of smear tests under CervicalCheck, it would provide individual women with the result of a re-examination of their original slides, carried out by labs in the UK.

After much delay and some controversy, the Royal College of Obstetricians and Gynaecologists (RCOG), which was engaged to lead the review, has now come back with an aggregated report on its examination of the slides of more than 1,000 women.

Not for the first time, it was evident on Tuesday at the media launch of their 50-page report that the debate around CervicalCheck operates on two planes. The assessors, all leading specialists from England, declared their confidence in the Irish cervical screening programme, told us it was working effectively with results that are in line with those in England, and was “not an outlier”.

The graphs in their presentations were sometimes crowded, but the lines were pointing the right way – indicating a continuing fall in cervical cancer cases since screening began.

Of this there is no doubt – cervical cancer screening saves lives.

Just not, however, the lives of the 12 women where the RCOG reviewers came back with a different interpretation of their original slide result from CervicalCheck, showing an opportunity was missed to prevent their cancer, or to diagnose it at an earlier stage.

This is the other, parallel plane on which the CervicalCheck debate operates. Amid the reams of figures and percentages and rationales being presented at the launch, it was hard not to think of the individual tragedies of the 12 families affected by these unnecessary deaths. Or to wonder about the wider group of 114 women where opportunities were missed to avoid the need for radical surgery, chemo or radiotherapy.

These are tiny numbers amid the tens of thousands of women who have been screened over the past decade, but it is inevitable their plight will attract immediate attention. The head tells us CervicalCheck picks up 2,500 pre-cancers a year and that cervical cancer rates are dropping by 7 per cent annually; the heart asks “why?” about individual tragedies.

The panel based their thumbs-up for the performance of CervicalCheck on a comparison with a similar review of tests performed by the well-regarded English screening programme for the disease, though it noted there were “significant differences” in the two reviews conducted on either side of the Irish Sea. It is a pity they did not look further afield for more comparisons, to Australia or Scandinavia, for example.

Ultimately, this report will not draw a line under the controversy. While providing reassurance about the since-revamped CervicalCheck programme, the focus on individual tragedies and the continuing concerns of the women affected are likely to continue to dominate.