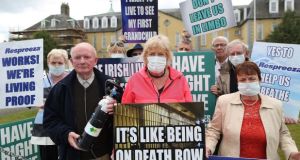 Members of the Alpha-1 Action Group protesting outside the offices of the HSE in Dublin earlier this year. Photograph: Julien Behal

Irish patients with severe lung disease are hoping to have their access to a “life-changing” drug extended.

The manufacturer of Respreeza, CSL Behring, recently said it was ending access to the drug under a compassionate use programme at the end of September.

Some of the patients, who have genetic emphysema, have been on the drug for up to a decade.

In response to a parliamentary question from Fianna Fáil’s Brendan Smith, Minister or Health Simon Harris said the HSE had sought assurances from Beaumont Hospital that appropriate care arrangements were in place for patients who were on the access programme, and that ethical guidelines had and continue to be followed in relation to the clinical trial and access programme.

“The HSE has advised that this process is ongoing. The HSE has also advised that it has decided to continue with the provision of this treatment to this patient cohort only, for an initial period of two weeks,” said Mr Harris.

An application to have Respreeza, which costs more than €80,000 per patient per year, provided for free was rejected by the HSE in August. CSL Behring decided to withdraw the drug after talks with the HSE failed to reach agreement.

The patients on Respreeza have alpha 1 antitrypsin deficiency - also known as alpha-1 - a hereditary condition that is unusually common in Ireland. Many were put on clinical trials from 2006 and, when these ended in 2010, moved to a compassionate use programme.

Many of the patients involved have been on the therapy for more than 10 years and have no other option, said the Alpha One Foundation, which runs a HSE-funded screening programme for the condition in Beaumont.

Geraldine Kelly, chief executive of Alpha One, said the 21 patients currently on the compassionate use programme were hopeful an agreement could be reached.