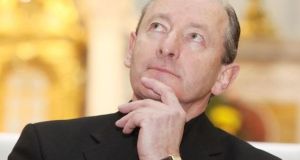 Minister for Health Simon Harris has sharply criticised as “ignorant”, comments from the Catholic bishop of Waterford and Lismore, which linked the HPV vaccine to promiscuity.

On Thursday, the bishop said getting the HPV vaccine “could” make young girls more promiscuous because “it changes the mentality”. He said: “The vaccine gets people to think they are fully protected against cervical cancer when they are not.”

He claimed the Gardasil vaccine was a “lifestyle issue” as well as a medical one. “We have to do better than to give our boys condoms and our girls injections at the age of 12 years,” he said.

However speaking as he addressed a conference of cancer survivors in Dublin on Friday afternoon Mr Harris said, “people should listen to doctors and – funnily enough – not bishops”.

The Minister departed from his official script to say “some of this week’s attempts by the bishop to purport to be a medical expert have been extraordinarily disappointing, extraordinarily dangerous and damaging to a very important public health campaign”.

“This is a very clear issue. The World Health Organisation, the European Commission and the EU’s Medicines Agency have all looked at this drug.

“Bishops I’m sure have many good qualities. Medical doctors they are not.”

Separately Minister of State and Waterford TD John Halligan described Bishop Cullinan’s remarks as “incredible” by attempting to “conflate the clinical value of the HPV vaccine with the Church’s views on the need to ‘help young people stay chaste’.”

“I know only too well – and have enormous respect for – the excellent work that Bishop Cullinan does in the Waterford community. He is a man of great integrity. But he is fundamentally wrong in his comments on the HPV vaccine, which go against a massive body of medical and scientific evidence. And his attempts to weigh in on a medical argument are ill-advised, to say the least.

“Religion has no place in medical debate and the Catholic Church’s track record on the medical welfare of Irish women speaks for itself,” said Mr Halligan.