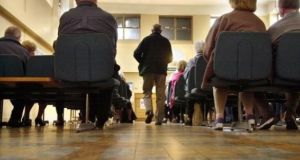 Billy Kelleher says the HSE has failed to provide up-to-date figures on the number of people waiting for critical diagnostic scans in hospitals nationwide.

The Health Service Executive has been accused of stalling on the publication of waiting list figures for MRI, CT and other scans.

Fianna Fáil Health Spokesperson Billy Kelleher has attacked what he claims is the HSE’s “persistent failure” to provide up-to-date figures on the number of people waiting for critical diagnostic scans in hospitals nationwide.

“Every year for the past three years I have sought this information and every year the HSE has avoided providing it,” he says.

“I have still not received these statistics, despite persistent questioning, so we are now in a situation where there is no up-to-date national data available for the numbers waiting for MRI scans, CT scans and bone scans.”

Limited information that has emerged in relation to waiting lists in specific hospitals shows that in many cases, patients are waiting months and even years for basic tests.

In summer 2015, the HSE told Mr Kelleher it was “working to improve” on the key performance indicators reported by hospitals and hoped to begin national collection of standardised data on scans from 2016.

But last year Mr Kelleher was told the HSE was still “working to establish a system to track waiting lists for a ranger of diagnostic procedures”.

It added: “Such a system requires significant testing and validation which, in time, will facilitate the production of national data reports … for diagnostic waiting times”.

In response the TD’s latest query, submitted this month, the HSE repeated it was “working to establish a system to track waiting lists for a range of diagnostic procedures”. It repeated the previous year’s line about the system requiring “significant testing and validation”.

Mr Kelleher said the delay in providing the information was “completely unacceptable”.

“It’s simply ludicrous that after all this time the HSE cannot provide this information as a matter of routine. Every month the National Treatment Purchase Fund publishes validated waiting lists for in-patients, day cases and outpatients across an enormous range of specialities.

“It should be given the responsibility for these waiting lists as well since the HSE has proven to be completely incompetent when it comes to compiling and providing what should be standard information”.

According to the information provided by the HSE, CT scans are provided in 39 hospitals, MRI scans in 29, and bone scans in 13.