Scientists document 59.3 per cent drop in average amount of sperm produced by Western men between 1973 and 2011 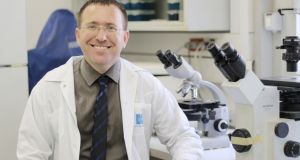 Dr Hagai Levine, from the Hebrew University of Jerusalem, who co-led the research, said the study “is an urgent wake-up call for researchers and health authorities around the world to investigate the causes of the sharp ongoing drop in sperm count, with the goal of prevention.” Photograph: Hebrew University/PA

Sperm counts of Western men are in a “shocking” downward spiral that poses a potential threat to fertility in industrialised countries, a major study has found.

Scientists documented a 59.3 per cent drop in the average amount of sperm produced by men from North America, Europe, Australia and New Zealand between 1973 and 2011.

The trend appeared to be ongoing since the rate of decline remained “steep and significant” in the last 15 years of the analysis. One possible cause could be environmental chemicals, it is claimed.

Dr Hagai Levine, from the Hebrew University of Jerusalem, who co-led the research, said: “Given the importance of sperm counts for male fertility and human health, this study is an urgent wake-up call for researchers and health authorities around the world to investigate the causes of the sharp ongoing drop in sperm count, with the goal of prevention.”

Other fertility experts described the findings as “shocking” and warned of a “double whammy” caused by the combined effects of falling sperm count and women in modern societies waiting until their 30s to get pregnant.

The research, published in the journal Human Reproduction Update, is based on a rigorous analysis of pooled data from 185 carefully screened studies.

It suggests that sperm counts have fallen by more than half in Western countries and the decline is real and not due to confounding factors such as different methods of measuring sperm numbers or population changes.

No similar pattern was seen in South America, Asia and Africa, although fewer studies had been conducted in these countries.

Sperm count measures the number of sperm present in every millilitre of sperm and has a normal range of between 15 million to more than 200 million. A sperm count of less than 15 million is considered to be “low”.

Previous reports of falling sperm count have been hotly debated and challenged by some experts as unreliable.

Co-author Professor Shanna Swan, from the Icahn School of Medicine at Mount Sinai, New York, said: “Decreasing sperm count has been of great concern since it was first reported 25 years ago.

“This definitive study shows, for the first time, that this decline is strong and continuing.

“The fact that the decline is seen in Western countries strongly suggests that chemicals in commerce are playing a causal role in this trend.”

Environmental and lifestyle factors including exposure to chemicals in the womb, adult exposure to pesticides, smoking, stress and obesity have all been previously linked to falling sperm counts.

Many experts believe falling sperm count may act as a “canary in the coal mine” signalling broader risks to health.

Professor Daniel Brison, scientific director of the Department of Reproductive Medicine at the University of Manchester, said: “The extent of the decline in sperm counts in the Western world revealed in this study is shocking.

“The message is not new; we have suspected this decline for many years, however this study is the most comprehensive to date and includes analysis of nearly 200 published studies.

“Previous smaller studies have suffered from confounding factors, including the fact that methods of counting sperm in the laboratory might have changed over the years, or that the populations of men being studied might have changed.

“This new analysis overcomes those problems by including a large number of studies of varying design and location around the world, to confirm that the decline in sperm counts is likely to be ‘real’.”

Professor Richard Sharpe, from the Medical Research Council Centre for Reproductive Health at the University of Edinburgh, pointed out that in northern Europe today more than 15 per cent of young men have a sperm count low enough to impair fertility.

He added: “As the present study indicates, this is likely to get worse rather than better as we move forwards in time. What is not so widely appreciated is that the coincidence of this change in men with delay in couples trying for a baby until the female partner is in her 30’s (when her fertility is declining progressively), creates a double whammy for couple fertility in modern Western societies.

“Whilst assisted reproduction techniques (ART) can potentially remedy this for some, ART is costly, highly invasive for the female partner and also becomes progressively less effective with female age. Therefore, looking ahead, I can only conclude that couple infertility is set to increase.”

Allan Pacey, professor of andrology at the University of Sheffield, said he had not been convinced by previous studies claiming to have found evidence of falling sperm counts, which were flawed by various kinds of bias.

However the new research had dealt “head on” with many of these issues.

He stressed that despite the decline reported in the study, average sperm counts remained in the “normal” range.

Prof Pacey added: “The debate has not yet been resolved and there is clearly much work still to be done. However, the paper does represent a step forward in the clarity of the data which might ultimately allow us to define better studies to examine this issue.

“Ideally, we would have funded large prospective epidemiological studies of healthy males 25 years ago and this would by now have given us a clear answer one way or the other.”