St John of God may cut services for hundreds of patients 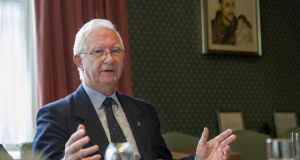 The St John of God order, which has been embroiled in controversy over the millions in undisclosed payments it gave to its executives, has not ruled out cuts to its services for hundreds of patients as a result of “funding difficulties”.

It has also confirmed that it paid its subsidiary the St John of God Community Services €10.4 million in management charges, some of which helped fund the pay of senior managers.

In a letter to service-users and their families, the provincial of the order, Brother Donatus Forkan, declined to rule out a reduction in or a closure of some of its services, stating that the order was currently in talks with the HSE on funding.

He said he understood the “anxiety and concern” among families that some of the organisation’s services may no longer be available after September.

“I confirm that we continue to have funding difficulties. However, we are continuing discussions with the HSE in relation to securing the appropriate level of funding to operate our services in Dublin, Kildare, Kerry and Louth.

“I am hopeful that these discussions will reach a positive conclusion and that we will be able continue to provide and develop our services to people with intellectual disability and those with mental-health issues,” he said.

In the letter, Brother Forkan also apologised for the “critical commentary in the media” surrounding the findings of a HSE audit into St John of God.

The audit found that the organisation paid top-ups and other undisclosed payments to 14 senior executives over a 30-year period. Top-up payments are explicitly banned under public pay policy.

In the letter, Brother Forkan accepts that the payments to senior managers were significant and were made at a time of great austerity.

However, he insists the payments were part of a structure that evolved over the years and were necessary to avoid some members of the management team losing part of their pensions, something which could have led to the St John of God order being subject to legal action.

“The order believed that by making these payments that none of these 12 people could make a claim against the order at retirement if their pensions were not paid on the entirety of their salaries. That was the intention and aim of the order when making the payments,” the letter said.

The HSE audit could not determine a final total for payments given to senior executives.

St John of God denies the figure is in the region of €12 to €15 million, as has been reported, and has insisted no monies were diverted from service-users to fund the payments.

In the correspondence, Brother Forkan said €10.4 million was transferred from the St John of God order to St John of God Community Services - the HSE-funded wing of the charity that provides support services for people with mental-health issues or intellectual disabilities.

St John of God Community Services receives €130 million in State funding annually, but has told HSE officials in recent meetings that it is facing a €9 million deficit due to increasing care costs.

Brother Forkan said the money transferred went towards the organisation’s roles and responsibilities across its services, including in Malawi, Zambia and Korea.

The money was also used to cover a portion of the salary of senior managers who transferred from the order to the community services body in 2013.

The letter was issued to all service-users on Tuesday morning.