Nine new high-tech drugs to be made available to patients 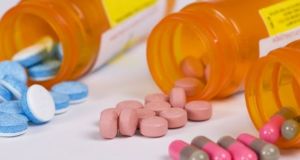 Nine new high-tech medicines are to be made available to patients within months following the resolution of a funding dispute between the Health Service Executive (HSE) and the Department of Health.

The drugs, for conditions such as cancer, heart disease and depression, will be funded from the HSE’s existing budget.

The HSE says some of the drugs will be available to patients at the end of September while others will be made available “as soon as is feasibly possible”.

The HSE had previously said it did not have the funds to supply the drugs to patients but changed its stance on Friday after the department sent it a letter providing clarity on funding.

Under the agreement, the HSE will be able to fund the drugs through savings expected as a result of the number of medical cards fall due to the improving economy.

The drugs will cost €117 million over five years but the HSE has received assurances that funding them will be an identified priority for the Department in future Estimates processes.

In a statement, the HSE said the letter from the department provided clarification on sustainable funding arrangements for the treatments “for 2018 and beyond”.

While speedy provision of the nine treatments was a priority, of paramount concern was patient safety, the HSE said.

The department’s position was that the HSE had the funds to sanction the new drugs, which have been delayed for a year or more.

Under a framework agreement for the pricing and supply of medicines signed last year, drugs approved for use by the HSE but for which they have no funding go forward to the Minister for Health. He then decides whether to seek Cabinet approval for extra resources.

This is what happened notably with cystic fibrosis drug Orkambi following an intensive lobbying campaign by patients and their families.

However, in a letter to the HSE, the department this month said it is the HSE’s responsibility to find money for new drugs in its existing budget allocation.

It said it believed the money is already available.

The Irish Pharmaceutical Healthcare Association, whose member make the drugs at issue, welcome the resolution. However, chief executive Oliver O’Connor said lessons had to be learned from “this dysfunctional process”.

“The assessment and approvals process must be speeded up. It must be orderly and predictable, with clear communications. And there has to be confirmation that the HSE will no longer be required, by whatever process, to send medicines up to the Minister or Government for political decision.”

Funding the drugs this year will cost only €3 million but the full-year cost rises to €12 million next year and more in succeeding years. The HSE, which is €21 million under budget for the first six months of the year, was concerned it would not be able to fund the drugs from 2018 on.

The nine drugs include Erivedge for basal cell carcinoma, Brintellix for depression and Entresto for heart failure.