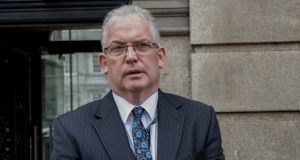 The HSE has warned the Government it is facing a projected €300 million financial deficit this year.

The Department of Health has told the HSE the financial performance in the health service in the early part of the year was “extremely disappointing”.

It said the HSE should draw up detailed plans for making savings and maximising efficiencies across the health system so that a break-even position will be achieved.

The cabinet sub-committee on health, chaired by the Taoiseach, Leo Varadkar, is expected next week to consider projections which suggest that acute hospitals will overspend by about €80 million and disability services by close to €20 million.

It is understood the HSE has argued that much of the projected overspending stems from issues outside of its control.

It has contended that it has received no funding to meet the cost of a Government decision to bring forward a €1,000 pay rise for health staff – and other public service personnel – under pressure from public service unions. This is expected to cost nearly €60 million, while it is understood the HSE has also argued that deals on pay issues reached between the Government and doctors and nurses are similarly unfunded.

The Department of Health said on Wednesday night there would be no cuts to agreed services.

“Services will continue to be delivered in line with the National Service Plan. In a budget of €14 billion, there is a responsibility to pursue opportunities to make savings in ways that do not reduce service levels, through effective management of resources.”

The Department of Health told HSE chief Tony O’Brien in July that the overspending in the early part of the year “must raise questions for the HSE in its performance management of particular hospital groups, hospitals and community healthcare organisations”.

However, the HSE maintained in correspondence that it had flagged to the Department last year about a “high delivery risk” attaching to some “stretched targets” it was given.

The Department of Health said it was a matter for the Government and the Oireachtas as to whether there would be supplementary health budget provided. It said it was operating on the basis no additional funding would be allocated to meet overspending on commitments in the HSE service plan but was in talks about money for issues such as central wage agreements and any overrun in settlements by the State Claims Agency.

Alan Kelly: Labour Party unlikely to enter coalition government 09:31
Sunny weather expected with temperatures to reach 18 degrees 09:13
Teaching children the main stress source for families adapting to restrictions 02:53
'It is a scary time' - the nursing homes battling coronavirus clusters 02:29
Coronavirus: Why are men twice as likely to die as women? 02:09

1 Coronavirus: More ‘striking’ evidence BCG vaccine might protect against Covid-19
2 Boris Johnson spends night in intensive care after coronavirus symptoms worsen
3 Coronavirus: Why are men twice as likely to die as women?
4 Genetics shed light on origins of Irish strains of Covid-19
5 Donald Trump’s clown car administration has put the fear in all of us
Real news has value SUBSCRIBE