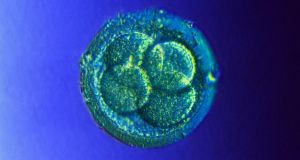 A human embryo. The Irish Fertility Society told the Minister for Health that family planning was “a private matter” that should not be interfered with by legislation. Photograph: Yorgos Nikas

Fertility clinics have sought clarification from Minister for Health Simon Harris over the disposal of embryos created in assisted human reproduction after new regulations are introduced later this year.

The clinics say any embryos already created before the changes come into force should be allowed to be used at a time of the woman’s choosing, subject to medical considerations, and should not be limited to a period of three years.

Mr Harris plans to commence parts two and three of the Children and Family Relationships Act later this year, thereby banning the anonymous sperm donation and creating a register of donor-conceived children.

The Irish Fertility Society, which represents most of the fertility clinics in the State, told the Minister in a letter in May that family planning and child spacing was “a private matter” that should not be interfered with by legislation. “Do you intend us to dispose of these embryos after the time limit has passed? That is something that is so anathema to our practice, and we will not comply with.”

The department last night said the provisions of this section did not apply to embryos formed before the date on which it comes into operation.

In the letter, the society expresses strong opposition to the proposed ban on anonymous sperm donation and the creation of a register that would allow donor-conceived children obtain personal family information once they turn 18.

However, the Children’s Rights Alliance called for the urgent introduction of the legislation to ban anonymous donations in assisted human reproduction.

“Children have a right to know their identity. The Act is important because it seeks to protect children’s identity by banning the use of anonymous donations in assisted human reproduction,” said chief executive Tanya Ward. “It also clarifies parentage for children who are conceived this way, establishing a legal relationship between them and their parents.”

Ms Ward pointed out that many adoptions were not recorded properly, “causing immeasurable damage to people by not being able to access their past and their history”.

“Assisted human reproduction can be an important and life-enhancing process for those wishing to have children when the correct medical and emotional support is provided. This does not take away from the fact that children born as a result of this process have a right to know their identity and their origins, in the same way as all other child in Ireland have.”

UCC law lecturer Dr Deirdre Madden said the rights of children to access information on the identity of donors should take priority, even if this caused supply issues for fertility clinics.