Clear divisions between British and Irish governments on direct rule 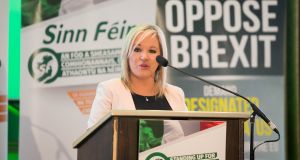 Sinn Féin and the DUP moved closer to re-establishing the Northern Executive on Wednesday night, after pressure from the Irish and British governments and a series of informal contacts between the parties in recent days.

The two Stormont leaders, the DUP’s Arlene Foster and Sinn Féin’s Michelle O’Neill, signalled that a return to the talks table is on the cards in the coming days, with both women saying they believed progress was possible.

A senior Government source in Dublin indicated that formal talks would begin next week. Sources stressed that while there is no guarantee of success, the parties would not be returning to the talks if they believed a successful conclusion was unlikely.

The imminent breakthrough, however, comes following open differences between the Irish and British governments over the possibility of direct rule from Westminster if the parties fail to agree on a relaunch of the power-sharing institutions.

Dublin has insisted that there can be no return to direct rule, while the British have said that joint authority with the Irish Government is not an option.

On Wednesday, in the House of Commons, the British prime minister Theresa May confirmed there could be no joint authority with Dublin if the current negotiations in Northern Ireland collapse and Britain imposes direct rule.

Responding to a question in the House of Commons from the DUP’s Westminster leader Nigel Dodds, the prime minister said that the Good Friday Agreement did envisage a role for the Irish government in North-South co-ordination.

“I am happy to confirm that we would not be looking at a joint authority. He [Mr Dodds] will be aware that the Belfast Agreement does include within it certain responsibilities in relation to the Government of the Republic of Ireland in North-South co-ordination,” she said.

She was speaking after Mr Coveney said there could be “no British-only direct rule” if the institutions at Stormont were not re-established. That has been the consistent position of the Irish Government, but Mr Coveney’s remarks prompted an unprecedented response from the Northern Ireland Office late on Tuesday night which said the British “would never countenance any arrangement, such as Joint Authority, inconsistent with the principle of consent in the [Belfast] Agreement.”

The Irish Government played down public differences with London on Wednesday, but senior sources conceded that tensions between the two governments on Brexit may be leaking into their involvement in the North.

Mr Coveney updated the Cabinet on the Northern Ireland talks on Wednesday, but there was no discussion of the statement from the British government.

A Dublin spokesman said this was a “distraction” from the talks, and that the “primary responsibility” for restoring the Executive is with the parties themselves.

Downing Street also sought to play down the significance of the apparent conflict between London and Dublin over direct rule, stressing that both governments were working together to encourage the restoration of devolved government. A British government source suggested that Mr Coveney’s statement may have been taken out of context.

But other government sources said Mr Coveney’s comments were clumsy and justified the firm response on Tuesday night. Some of the language in that response was identical to that used in the Conservatives’ Northern Ireland manifesto.

British government sources insist that Tuesday night’s response to Mr Coveney was not made under pressure from the DUP, on whose support at Westminster Ms May’s government depends for its survival. But Jeffrey Donaldson, the DUP’s chief whip at Westminster, made clear on Wednesday that his party would bring down the government if Dublin were to be given a role in direct rule.

Although the relationship between Mr Coveney and Northern Ireland secretary James Brokenshire are said to be cordial, British sources acknowledge that they face a more muscular approach to British-Irish relations from Mr Coveney and Taoiseach Leo Varadkar.

One Whitehall source described the impact of Dublin’s new tone on Brexit as “bracing” and British officials acknowledge that tensions between the two governments over Brexit have informed the broader relationship between them.

Sinn Féin Northern leader Michelle O’Neill said on Wednesday that “it is clear both governments are co-equal. They have a joint and equal role in the process, in safeguarding rights and implementing the agreements.

“The Irish Government must assert that role and the British government accept that they are partners in that process. The St Andrew’s Agreement brought about an end to the ability of the British government to suspend the institutions and impose direct rule. It also committed, in the event of no agreement, to a new British-Irish partnership to implement the Good Friday Agreement.

“Sinn Féin believes that formal talks should be reconvened and that agreement is possible. The route map to establishing the Executive is clear, it’s reasonable and it’s achievable. Implement previous agreements, deliver equality for all and embrace genuine partnership government. However, this will require that both governments honour their obligations as co-equal guarantors of the agreements and for the British government to demonstrate, ‘rigorous impartiality’ that over-rides any short-term deal at Westminster.”

On RTÉ on Wednesday, Ms Foster said the DUP had been “ engaging in intensive discussions with Sinn Féin”.

“We thought it was best to do that away from any spotlight. Those have been good discussions and I hope that they can pave the way now towards more structured talks that will probably start next week. I still think that there are gaps between us but we’re committed to finding a way forward.”