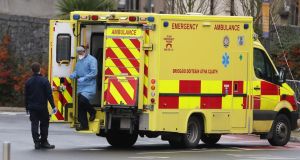 An ambulance arrives at the Mater Hospital in Dublin this week, as hospitals come under pressure from a surge in Covid-19 patients. Photograph: Niall Carson/PA Wire

The pressure on hospitals from the unprecedented surge in Covid-19 patients is expected to peak in the next week, according to public health officials.

But even after the number of virus patients in hospital and in intensive care units starts to decline, officials are predicting a “huge number” of patients still requiring treatment, as well as continued outbreaks in hospitals and nursing homes.

It will be “well into February” before hospitals are able to return to treating large numbers of non-Covid patients other than for emergencies, officials told a National Public Health Emergency Team (Nphet) briefing on Thursday night.

Officials are hoping the recent reduction in Covid-19 case numbers will translate into a fall in Covid-19 hospital patients from the current level of almost 1,800 to 650-800 by the end of January “if it goes well”.

“Getting from 1,800 to 800 will be a huge achievement for a couple of weeks,” said Prof Philip Nolan, chair of Nphet’s epidemiological modelling advisory group.

The number of patients in ICU, now at a record 169, is forecast to drop to 100-120 by the end of January if current progress is maintained.

The Health Service Executive has effectively now reached its intensive care unit limit and is using its surge capacity, its chief executive Paul Reid said. “Our teams are working around the clock. It is in all senses a race to save lives in all our hospitals.”

With up to 10 per cent of health service staff forced out of work by infection or being a close contact of a Covid-19 case, hospitals are struggling to keep beds open to meet demand.

More than 5,000 healthcare workers have been infected with Covid-19 since Christmas, new figures show; 25 such staff required hospitalisation and one was admitted to the ICU. There were no deaths, according to figures from the Health Protection Surveillance Centre.

A further 28 deaths of Covid-19 patients were reported on Thursday, along with 3,955 new cases. Almost half of all cases reported during the pandemic occurred in the last fortnight, when one out of every 67 people tested positive.

The new, more transmissible Covid-19 variant that was first identified in the UK in December now accounts for 46 per cent of samples sequenced by Irish labs, officials revealed. Because of concerns over another variant emerging in Brazil, which has not been detected in Ireland, travellers from Brazil must self-isolate after arriving in Ireland and present for a Covid test, Nphet has recommended. This is similar to measures introduced recently for travellers from the UK and South Africa, arising from the emergence of variants of concern in those countries.

With 1.57 per cent of people having received a first dose of the Covid-19 vaccine, the State now has the second highest coverage in the EU, according to Our World in Data.

Meanwhile, the head of emergencies at the World Health Organisation has warned that the Republic, along with other countries, could be “in serious trouble” if new variants of Covid-19 “change the rules of the game” in terms of preventing transmission.

Dr Mike Ryan expressed concern over people not “sustaining the things we need to do at any level” as the pandemic progresses, when new variants could change the rules of infection prevention.

Ireland did exceptionally well twice during the pandemic, he said on Thursday. “Irish people, Irish science, the Government, they all came together and you nailed it.” Though case numbers have increased since, he believed Ireland could turn things around with a concerted effort.

With the number of Covid-19 deaths worldwide expected to pass 2 million in the coming days, Dr Ryan warned people have become “numbed” to the numbers. The world was facing into “headwinds” as a result of a “perfect storm” of cold weather driving people indoors, social mixing over the Christmas holiday season and the emergence of virus variants.

Meanwhile, the Government is planning to begin reopening special schools and primary classes for children with additional needs from January 21st. It follows agreement with school staff unions.

Tánaiste Leo Varadkar has reiterated it is likely that businesses that are currently closed will remain shut “until the end of March”.