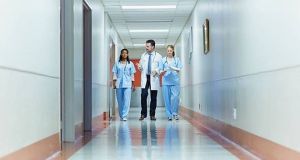 The Irish Hospital Consultants Association said over 70% of consultants surveyed said they would “seriously consider resigning from their public hospital posts unless the discriminatory salary terms are corrected”. Photograph: Getty Images

Hundreds of recently-appointed hospital consultants say they are “seriously considering” resigning from public hospital posts over the lower salaries they receive than longer-serving colleagues.

The Irish Hospital Consultants Association (IHCA), which conducted a survey of their members on the matter, said the system of consultants delivering services to patients in public hospitals was “on a cliff edge”.

In the survey of 317 recently-appointed consultants, almost all (99 per cent) believed the existing two-tier pay system was having an adverse impact on the delivery of patient care due to the large number of consultant posts that were unfilled or filled on a temporary basis.

The IHCA said over 70 per cent of the consultants surveyed said they would “seriously consider resigning from their public hospital posts unless the discriminatory salary terms are corrected”.

It also said that the vast majority of respondents (95 per cent) strongly agreed that the lower salary terms for recent entrants did not reflect the importance of the work and level of responsibility that they held in their public posts.

The IHCA said newly-appointed consultants on a type A contract – full time in public service with no private practice – were being paid €134,272, while pre-October 2012 appointees were paid €211,000 as of June 15th based on a recent High Court settlement.

IHCA president Dr Donal O’Hanlon said: “The survey has provided categorical evidence that our highly-trained specialist consultants will not continue to work in our health services if the persistent and blatant discrimination against them continues.

“Recently appointed consultants are on salaries significantly below those of their pre-October 2012 colleagues, who are currently being paid up to 57 per cent more.”

The issue dates back to October 2012, when the then Fine Gael/Labour coalition unilaterally imposed a cut of 30 per cent in pay for consultants hired after that date. The pay cuts were partially reversed in late 2014, but medical organisations have argued that a significant pay gap remains.

Last month the Government agreed a €200 million settlement with medical consultants over its failure to pay increases under a contract negotiated in 2008. However, the settlement does not affect the two-tier pay structure for those appointed after 2012, and medical organisations have contended that the agreement last month will worsen the pay differentials.

Dr O’Hanlon said it was not surprising that 72 per cent of recently-appointed consultants ranked equal pay for equal work as the most important aspect of their working terms and conditions given the ongoing extreme discrimination they were being subjected to by the State as their ultimate employer.

He noted that 92 per cent of the respondents said they were personally aware of colleagues working abroad who would not return to work in the Irish public health system as a direct result of the lower salary terms.

Dr O’Hanlon said the results of the survey should set alarm bells ringing at Government level “as it is now abundantly clear that consultant delivery of services to patients is on a cliff edge because it is being fundamentally and critically undermined by the State’s persistent discrimination against internationally sought after specialist hospital consultants.

“There are approximately 450 approved consultant posts, a full 15 per cent of the total, which cannot be filled on a permanent basis, and the age profile of the consultant workforce suggests this problem will increase as 25 per cent are over 55 years old.

“About half of the 450 posts are vacant and some are filled on an agency basis, at costs which are up to three times the discriminatory salaries being paid to recently-appointed consultants.”

He added that if the two-tier pay issue “is not fully addressed by the Government without delay the IHCA will continue to vigorously pursue the ending of the discrimination through legal and other actions”.