Vicky Phelan: ‘Everything is being put through a lawyer. Why is that?’ 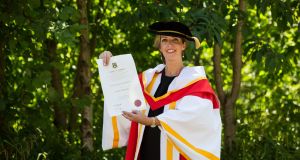 Vicky Phelan, who was recently conferred with an honorary doctorate at University of Limerick. Photograph: Oisin McHugh True Media.

The head of the scoping inquiry into the cervical cancer screening scandal says his work is ‘still being delayed’, Vicky Phelan has said.

The screening controversy came to light after the Limerick woman settled a High Court action when it emerged her cancer was missed in a smear test three years before she was diagnosed.

The missed smear test was only discovered in 2014 after her diagnosis but she was not told until 2017.

Dr Gabriel Scally, a Northern Ireland public healthcare specialist, is carrying out a scoping inquiry into the scandal for the Government.

Speaking on Thursday, Ms Phelan said: “It is scandalous that we’re not nearer the truth.”

She said Dr Scally told her on Thursday his work is still being delayed. “Everything is being put through a lawyer. Why is that?” she asked on RTÉ’s Today with Miriam show.

Ms Phelan added that she agreed with a call from her oncologist Dr David Fennelly for every woman with cervical cancer to have access to the ‘super drug” Pembrolizumab.

The HSE is making decisions about what types of cancers have access to drugs, she said, adding there were many women, and men, with different cancers who might benefit from this drug.

A protein test determines those who are suitable to take the drug, she pointed out. Her own tumours have been reduced by 50 per cent.

Ms Phelan also said a course of chemotherapy costs almost as much as Pembrolizumab. “Chemo doesn’t cure them. There is a chance of a cure with this drug.”

“Everyone should be given a chance at life.”

She said that the reason she fought her case was that she had no other option and would have done anything to get access to the drug.

“The drug is working for me. . . . and I would like to see them [drugs companies] finance some of the bill.

“The bottom line is the system has failed. The seriousness of that failure is being downplayed. It’s scandalous that we’re no nearer the truth.”

Ms Phelan settled a High Court action in April against Clinical Pathology Laboratories for €2.5 million after she learned that her cancer was missed through a chance reading of her medical file while waiting for an appointment.

She had attended CervicalCheck for a routine smear test in 2011 and wrongly received the all-clear, but was not told about it. The HSE said it knows a review was warranted in 442 cervical smear cases and more than 200 cervical smear results should have resulted in earlier intervention.

The number of women affected by the cervical cancer controversy has increased to 221 from 209, a Dáil committee was told today.