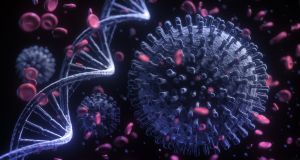 The seroprevalence study examined the levels of antibody evidence of Covid-19 infection among healthcare workers at St James’s Hospital in Dublin and University Hospital Galway (UHG).

Healthcare assistants are more likely to be at risk of contracting Covid-19 from patients in hospital than doctors or nurses, a study examining two Irish hospitals has found.

The seroprevalence study examined the levels of antibody evidence of Covid-19 infection among healthcare workers at St James’s Hospital in Dublin and University Hospital Galway (UHG).

At St James’s Hospital, one in 10 staff had tested positive for Covid-19 at some stage between March and October, with 1.8 per cent of staff testing positive in UHG over the same period.

The Health Service Executive study, published on Thursday, was based on samples taken from more than 5,700 hospital staff last October.

More than one in five participants who had daily contact with known or suspected cases were found to have Covid-19 antibodies in St James’s Hospital, the study found.

Healthcare assistants (HCA) were the most likely to have Covid-19 antibodies, detected among 27 per cent of HCA staff in St James’s Hospital. Antibodies were detected in 21 per cent of nurses at the Dublin hospital, and 14 per cent of doctors who took part in the study.

Some 6.9 per cent of doctors in UHG had Covid-19 antibodies, followed by 6.2 per cent of healthcare assistants, and 4.7 per cent of nurses.

The rate of the virus among hospital staff was six times higher than the community in Dublin and Galway, based on comparisons to similar seroprevalence antibody studies of both areas last year.

The vast majority (95 per cent) of staff who had previously tested positive for the virus had detectable antibodies, the study found.

However, 39 per cent of staff who were found to have antibodies had never been diagnosed with Covid-19. This represented 3.9 per cent of the 5,787 staff included in the study.

The study said it was likely these healthcare staff were working while asymptomatic and infectious with the virus.

This meant there was “potential for onwards transmission to patients and other staff members,” if the proper wearing of personal protective equipment (PPE) and other measures were not followed.

The study said its results supported calls for the testing of all asymptomatic staff following outbreaks, or cases of patients acquiring the virus within the hospital.

The higher rate of infection among healthcare assistants was likely due to the “proximity to patients that is required” in the role, the study said.