Minister: Agreement must be reached ‘collaboratively’ with family doctors 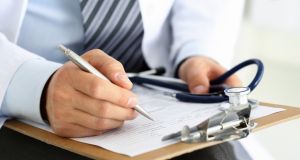 Simon Harris said it was his “ambition” to extend free GP care under-12s initially, before introducing it for all children. Photograph: iStock

Minister for Health Simon Harris says he hopes to reach agreement with family doctors on extending free GP care to children under 12 by the end of this year.

The existing scheme that provides for free care for children aged under six years could then be extended from next year, he says.

The provision of free GP care for all children is a commitment in the Programme for Government and was also in the Fine Gael manifesto at the last election. The existing scheme was supposed to have been extended to under-12s by last year but has been held up by opposition from doctors.

Mr Harris said it was his “ambition” to extend the scheme to under-12s initially, before introducing free GP care for all children. However, this has to be done in a “collaborative way” with GPs.

He said doctors had to be listened to in relation the pressures they are experiencing and it was also important to resource general practice.

Talks are currently under way with the Irish Medical Organisation on a new GP contract. Mr Harris said extending GP care was a priority for the Government in these talks and he hopes progress is made on this as part of a first set of proposals to emerge from the negotiations by the end of the year.

Figures released this week show the HSE paid more than €540 million in fees to GPs last year for treating medical card and GP visit card patients. This is less than the cost of running a small hospital, according to the Minister.