Prosecco may be contributing to increased dental decay

Combination of carbonation, sweetness and alcohol has the potential to cause tooth sensitivity and enamel erosion 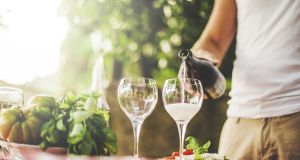 The president of the Irish Dental Association says he sees a lot of patients who are suffering dental erosion due to consumption of carbonated drinks, including sparkling wines. Photograph: Getty Images

Ireland’s growing fondness for Italian fizz could be leading to more fillings, dentists have warned.

Prosecco, because it is acidic and sweet, may be contributing to increased dental decay, they say.

Sales of sparkling wines other than champagne are growing at a rate of 20 per cent a year, according to industry analysts. Within the category, prosecco sales are catching up with Spanish cava. In contrast, sales of more expensive champagne are rising at a more modest 4 per cent.

In the UK, sales of prosecco have soared from two million litres in 2009 to 77 million last year.

Robin Foyle, president of the Irish Dental Association, says he sees a lot of patients who are suffering dental erosion due to consumption of carbonated drinks, including sparkling wines.

He says the combination of carbonation, sweetness and alcohol in prosecco has the potential to cause tooth sensitivity initially, leading later to erosion as the enamel of the tooth is depleted. Often, where erosion is caused by drinks, this occurs at the front of the teeth, whereas food-related decay occurs at the back of the mouth.

Prosecco is regarded as potentially more harmful to teeth than champagne and cava because it is sweeter.

Dr Leah Smyth, general dentist at Smile Store, says the combination of fruit acid and bubbles in prosecco “can play havoc with your teeth”. Prosecco contains about one teaspoon of sugar per 125ml flute.

Dr Foyle advises Prosecco drinkers to minimise their risk of dental decay by sticking to the recommended maximum intake of alcohol of 14 units per week, drinking plenty of water while tippling and consuming food. They should also brush their teeth, after an interval of a few hours, to give the enamel time to harden up again.

He points out that all forms of carbonated water, and even plain water with lemon, pose some risk.